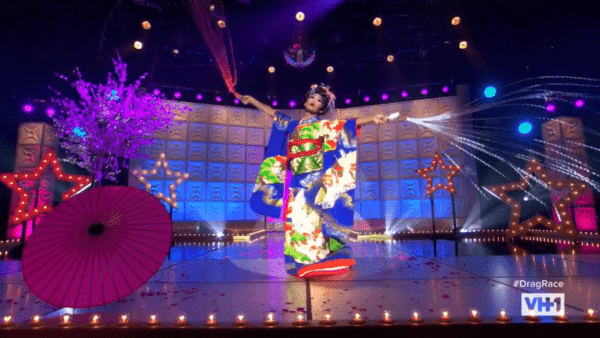 Happy ho, ho, holidays, henny! We must all be on the nice list this year, because RuPaul has blessed us with an All Stars season cast overflowing with GIFTS.

Recent favorites like Monique Heart mingle with institutions like Latrice Royale. Former flops like Jasmine Masters and Farrah Moan get a shot at redemption. Performers like Gia Gunn and Trinity The Tuck get to rebrand themselves and showcase a wider variety of skills. It’s going to be a bloodbath to the finale given all thiiiiiiiiiiiiiis talent. 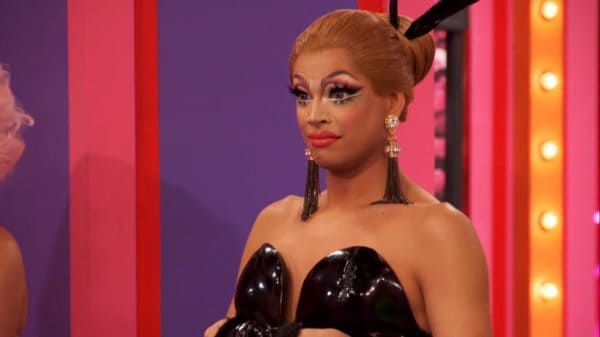 Folks kept it mostly cordial, until the first mini-challenge found them putting their glasses on and gloves off for a little light reading. It was a strong showing from Monét, Manila and the eventual winner Latrice, but no one really felt like they were shutting down the library with the kind of reads we might get from Bianca, Trixie or Bob. (That’s a high bar, I know, but this is All Stars, baby.) Farrah and Gia didn’t really land jokes; their reads were just nasty.

The maxi challenge was one of my favorite to kick off a season: A Talent Show. I’m so glad we’ve come to realize this is the easiest way for the queens to (re)introduce themselves to the audience by doing what they do best. (As opposed to doing a big group lip sync that really doesn’t help anyone.)

In the work room, Gia went out of her way to talk smack and antagonize her fellow competitors. Apparently, she’s keen to trade her old reputation as a sort of ditzy GIF sensation to this season’s primary villain.

On the stage, the gals turned it out for an audience of LGBTQ veterans and active service members, and it was quite the show. We’ll go deeper on each individual performance in our rankings below, but there were tons of highlights. Monique Heart’s original track, “Brown Cow Stunning,” Gia Gunn’s gorgeous kabuki, Latrice Royale’s high-energy color guard spectacular and Trinity’s campy tuck tutorial were standouts. However, my personal favorite was Manila Luzon’s bonkers live painting demonstration. She frantically worked a canvas to “In the Hall of the Mountain King,” but what she was painting was unclear. Finally, just as the music reached its frantic finale, Manila rotated the canvas 180 degrees to reveal she had painted a nearby vase and flowers completely upside-down. Then, for the big finish, her smock transformed into a matching dress. It was a true, true gag.

Not everyone was so lucky. Farrah Moan took a nasty spill during her burlesque number from which she could not recover. Jasmine Masters attempted … well, for argument’s sake, let’s call it “comedy.” She basically tried to recreate her popular web videos for a live crowd, and it just didn’t translate. They rightfully landed in the bottom two.

According to All Stars rules, the top two, Monique Heart and Trinity Taylor faced off in a lip sync for their legacy and the chance to choose who went home. Before they tore up the stage, they spoke to the bottom two girls. Farrah was still shook and sobbing throughout. Monique gifted us with the new iconic GIF we’ll be sending all our friends when speaking to Farrah, barking “I love you, but your cryin’ annoys me.” Gurl, same. Jasmine seemed pretty resigned to her fate, and failed to show Trinity and Monique the desire to fight.

We FINALLY got a lip sync ode to true queen Mariah Carey as Trinity and Monique tore it up to “Emotions.” In a long gown, Trinity had limited movement, but served face, while Monique danced circles around her. At one point, Monique attempted a sort of high-impact Sasha Velour reveal, ripping off her wig to shed some glitter underneath, but when she tossed the wig on the air, it snagged on a rafter and stuck there for the number.

Trinity was declared the winner, and revealed her chosen lipstick: Jasmine. 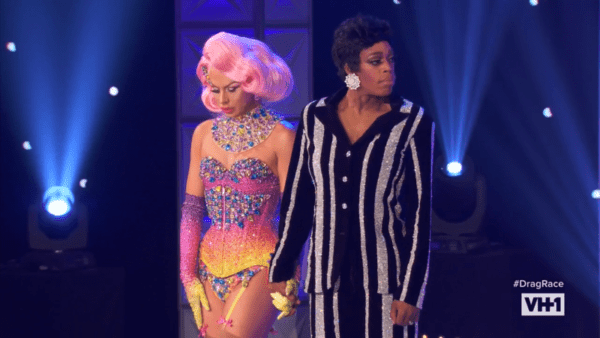 We’re only one episode in, but how does this crop of queens stack up? As usual, we’ve got our weekly rankings below. Just a friendly reminder, this is a subjective art based on performance, personality, personal feelings, whims, hunches and my state of mind any given day. It’s not that serious. Think you know better? Leave your rankings in the comments!

Honorable Mention: Drag Race guest judges typically run the gamut from fine (Meghan Trainor) to legendary (Khloe Kardashian), but Jenifer Lewis is in a whole other league. She did the most, had the most fun and doled out wisdom like a true drag mother. Sign us up for the House of Lewis any day.

1. If there were ever a queen who deserved a spot in the Hall of Fame more while simultaneously not needing it at all, it’s Latrice Royale. A beloved veteran with style and personality to the ceiling, the larger-than-life queen represents the best of the best the series has ever seen. She turned it all the way out in this first episode, serving grand dame glamour and high-energy dance in the talent show. Her reads were strong and true to the form. This is a stacked season, but if I had to make a pick for the winner today, it’s Latrice all the way.

2. Most girls come out of Drag Race with a higher profile and bigger budget, but has anyone grown as much a performer as a result of their time on the show than Trinity? She was a self-proclaimed classic pageant girl, but now she’s a campy comedy queen that fully understands her abilities. The reads were solid, and her tucking tutorial was flawless. She knew that it wasn’t actually about the tuck, it was about the presentation (that’s the part Gia totally missed when she was critiquing the concept in the work room). Given Trinity’s proclivity for procedures, a lip sync that focused so much on facial expressions didn’t feel like the best choice, but she sold those whistle notes well. Trinity is sticking around for a while, and I couldn’t be happier about that.

3. Call it the “Halleloo Effect,” but from Shangela’s signature to “Miss … Vanjie” many a queen have tried to make their own “Fetch” happen. Monique Heart‘s “Brown Cow” is one of the better attempts, turning a mild runway embarrassment into a pretty decent bop, actually. Monique always had the personality to make her a legend, but she lacked polish. Ru read her for the wig fiasco, so hopefully she took the message to … heart.

4. It is so good to see Manila back in the mix. She’s a clever, unique queen that will shatter expectations and surprise us week to week. Her beat-up, rundown Big Bird entrance look was the perfect little slice of her weird, wacky style, but that talent show performance was brilliant. Manila didn’t receive the lioness’ share of screen time this week, but every time she was on camera, she was a delight.

5. Gia Gunn lived up to her namesake, because she came locked and loaded, babes. Calling her “shady” makes it seem a lot more friendly than it was. Instead, Gia came for the other queens, and she wasn’t afraid to go low. For now, she’s in a position to judge. She looks head-to-toe flawless, and her earnest Kabuki showcase was gorgeous and genuinely moving. I love me a villainess, but it feels a bit like Gia is punching down going after Farrah so hard. Trinity was a tougher target and deflected her shade with relative ease. Gia is clearly a talent, but she’s going to lose favor with fans if she insists on being a troll.

6. The infamous Valentina lip sync is one of those moments that gay men will be asking each other where they were when they saw it happen. We as a community (and I especially) love throwing around the word “iconic,” but that moment absolutely qualifies. She’s just as strange and beautiful as ever, but it remains to be seen if she will embrace her snake side or the plucky ingenue this season. I don’t expect her to stick around the middle of the pack for too long, but her “talent” felt merely competent. Sure, proving she can lip sync may have been a “statement,” but I just wish she would’ve done something bigger/more special.

7. I say this with love and all due, but Monét needs to drop the sponge gimmick. Please. I’m begging. Monét X Change in confessionals? Still fantastic. But in drag, she just doesn’t shine under the bright lights. Monique was right to call out her simple leotard entrance look, and her talent performances was a miss. (To be fair, Monet is a trained singer, so I believe this was just an off day for her live vocal.) She’s quippy and kind, and I would relish any opportunity to see her perform live at bars across the country, it’s just still real hard to see her stand peep-toe to peep-toe with these other gals.

8. Naomi Smalls surprised a lot of doubters when she made it to the finals alongside Kim Chi and Bob. The young fashion queen is a striking presence, but she also has a silly side. She always looks great, there’s no question there. The performance itself was a snooze for just one juicy reveal. If she leans into her slapstick just a bit more, she could surprise everyone once again.

9. Will Farrah Moan win All Stars? No, definitely not. But, I agree with the decision to spare her this week. Watching that fall was heartbreaking, and she just could not recover. A more seasoned performer would have cracked the joke, turned it into a stunt or at least bounced back without missing a step. Instead, Farrah crumbled. It’s also not a wise move to make whining your whole brand. Farrah ain’t long for this world, but she came in with an ambitious and fully-realized performance that took an unexpected turn she was unprepared to deal with.

10. Yikes, Jasmine Masters. Just yikes. Worse yet, for all the fuss made over Jasmine’s lack of preparation, she was really just up there recreating one of her most famous viral videos. So, it lacked both urgency and craft. Ross hit the nail on the head when he clocked Jasmine for not knowing the difference between being funny and being a comedian. And, even considering Jasmine’s outfits were also lacking, the real kiss of death was the lack of self-awareness and humility to want to improve. Trinity made the right call to send Jasmine Masters home.

Previous Post: « Sarah Silverman: I’m Done Using ‘Gay’ as a Punchline — WATCH
Next Post: ‘SNL’ Riffs on ‘It’s A Wonderful Life’, Imagining a World Where Trump is Not President: WATCH »