NOEL CASLER. Former Apprentice contestant says Trump was a speed freak who snorted Adderall: “I’m not kidding this is true. I had a 24-page NDA non-disclosure agreement, I didn’t know that he was becoming president, now it’s no way dumbass, I’m telling you everything I know.”

MAR-A-LAGO. Trump plans 16 day holiday stay: ‘The upcoming visit would be longer than last year’s 12-day visit, putting Trump in Palm Beach a day earlier than his Dec. 22 arrival last year and four days later than his Jan. 2 departure. It would be his longest retreat at Mar-a-Lago, dubbed the Southern White House, since the president’s inauguration in January 2017.

CHICAGO. Victory Fund endorses Lori Lightfoot for mayor: ‘The only openly-gay candidate in the race for mayor of Chicago on Thursday won the endorsement of the only national organization dedicated to LGBTQ political empowerment. Victory Fund President and CEO Annise Parker called Lori Lightfoot a “police reform expert” whose experience as a former federal prosecutor, Police Board president and head of the old Office of Professional Standards will be “invaluable” as mayor.

TIBET. China warns Tibetans not to be “taken in” by Dalai Lama’s lies: “The people of Tibet should not be taken in by the Dalai Lama’s lies and clearly understand the importance of Communist Party rule in the region, the Chinese government said ahead of March’s sensitive 60th anniversary of him fleeing into exile.”

SICKENING. 7-year-old dies in Border Patrol custody. ‘…According to CBP records, the girl and her father were taken into custody about 10 p.m. Dec. 6 south of Lordsburg, N.M., as part of a group of 163 people who approached U.S. agents to turn themselves in. More than eight hours later, the child began having seizures at 6:25 a.m., CBP records show. Emergency responders, who arrived soon after, measured her body temperature at 105.7 degrees, and according to a statement from CBP, she “reportedly had not eaten or consumed water for several days.”‘

This is a disgusting statement dripping with cruelty, contempt and inhumanity. Everyone who worked on it should be ashamed of themselves. https://t.co/jxzxRzdFlC

JARED KUSHNER. Might be the new Chief of Staff because he’s the only one left.

OREGON. Vandals slash black Santa decorations in Beaverton, leave nearby white Santa decorations untouched: ‘Fritz Richard’s home is decorated with images of black Santas, Wiseman and a Nativity scene but it wasn’t until Wednesday that he decided to display that culture outside his house — including the inflatable Santa. He said he was a little worried about displaying a black Santa but didn’t think it was that big of a deal.  Less than 24 hours later, someone had destroyed it. Richard said someone deliberately slashed it — several times. ‘

COLORADO. How one couple changed minds on LGBT issues: “I remember getting angry, I remember getting depressed,” [Tim] Gill said. “I remember thinking that 53 percent [of Coloradans voted to pass Amendment 2], so presumably, we had 300 employees in Colorado. I know a number of them voted for Amendment 2. They voted against the civil rights of the person that was paying their salaries and the civil rights of people who were their coworkers.” 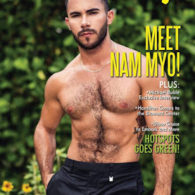 MASSACHUSETTS. How schools brought gay rights to the masses: “…in the 1980s and ’90s, a grassroots group of students, teachers and politicians in Massachusetts created the first comprehensive program to work to improve LGBTQ people’s experiences at school. Their effort served as a model for the rest of the country, changing how Americans think about supporting gay youth at school.”

TAN FRANCE. Queer Eye fashion guru says he was racially profiled by TSA, is on a list. “I’ve been put through extra security checks 3 times this week, and was just told by a TSA agent it’s because my name is on a list. WTF? I’m brown but that does NOT mean I’m a damn security risk!!!”

I have been asked many times if I inject steroids, yes, I have injected steroids in the past, but never again. It makes you look great for a bit, but the struggle you go through and the way you look after using steroids and the damage it does to your body is not worth it at all. I learned my lesson, and it took me time to rebuild my body again without relying on injecting steroids. I have much weakness in some parts of my body but yet I am happy with it almost all year around.