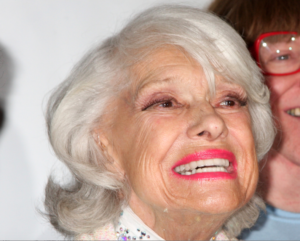 Photo above: Carol Channing arrives at a performance celebrating her 90th birthday at Pantages Theater on February 21, 2011 in Los Angeles, CA

“It is with extreme heartache, that I have to announce the passing of an original industry pioneer, legend and icon: Miss Carol Channing,” Boll said in a statement. “I admired her before I met her, and have loved her since the day she stepped … or fell rather … into my life. It is so very hard to see the final curtain lower on a woman who has been a daily part of my life for more than a third of it. We supported each other, cried with each other, argued with each other, but always ended up laughing with each other.”

Ms. Channing was bringing audiences to their feet night after night in a revival of “Hello, Dolly!” when she was 74 — appearing at the top of the staircase singing, “Wow, wow, wow, fellas,/Look at the old girl now, fellas,” resplendent in her scarlet gown and jewels, her platinum hair crowned with red plumage. Ten years later she was still getting applause, this time for a cabaret act. Nine years after that, just a few days before her 93rd birthday, she appeared at Town Hall in Manhattan as part of a celebration of the 50th anniversary of the night “Dolly” opened.

“Performing is the only excuse for my existence,” she said during her last Broadway appearance, in the 1995 revival of “Hello, Dolly!” “What can be better than this?”

The critic Walter Kerr called her “maybe the only creature extant who can live up to a Hirschfeld,” explaining that the theatrical cartoonist Al Hirschfeld “always lives up to the people he draws, but the people he draws don’t always live up to him.” Mr. Kerr added, “Here’s the exception: mascara to swim in, nobly tragic mouth, the face of a great mystic about to make a terrible mistake.”

She will be missed.