A hustler is filling his childhood backpack for a night on the job — Viagra, lube, and a pencil case to keep his money dry, among other essentials. We’re in his basement studio, an actual basement in the far reaches of Bushwick, seated on bargain furniture and scrupulously avoiding eye contact. As we’ll soon discover, though, getting in our faces is what gets Tyler off.

Bleach, which opened January 11, arrives on the outskirts of Brooklyn from Manchester, Stockholm, and Paris, where it was a hit at various fringe theatre festivals. It’s easy enough to see why a one-man play about a gay sex worker featuring hunky young actors (the night I attended it was Brendan George, who alternates with Eamon Yates) would draw a particularly attentive crowd — especially since director Zack Carey’s production only seats 10. 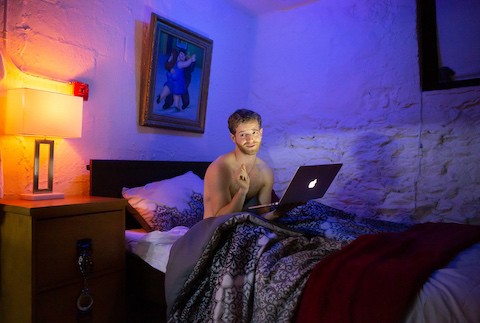 If you’ve come for the thrills of sharing close quarters with half-naked eye candy and a handful of total strangers, you’ll hardly leave disappointed. If you’re curious about the mundane details of sex work — how much, how many, how often in a night — the script by Dan Ireland-Reeves offers a bit of that, too.

But despite the extreme intimacy Bleach invites, the play also insists on keeping audiences at arm’s length. I don’t mean this literally; unless you state that you’re uncomfortable being touched at the outset, at some point you many find the performer perched on your lap. (Mr. George invited me to slap his butt through tighty-whities; I politely declined.) For all his candid confessions, including an awful crime that forms the action’s main crisis, we don’t really know who Tyler is. 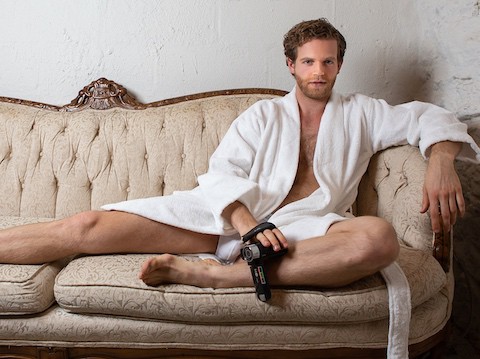 We do know that he’s a suburban boy who came to the city looking for excitement and started turning tricks to survive. In other words, he could be anyone. Many narratives about sex workers tend to follow this mold in order to establish a sense of shared humanity with viewers. The cliche exists for a reason. But we’re already in Tyler’s basement — hell, we’re practically in bed with him. Even if anonymity in the bedroom is your thing, it’s not quite as titillating when that bedroom is a stage.

Rather than his confessors, Tyler treats us very much like johns — purring out every detail of his story like a drawn-out seduction. But he already has us exactly where he wants us. What we want from him would perhaps be too much to ask an actual sex worker we hardly know: “Tell us who you really are, and what this is really like.” 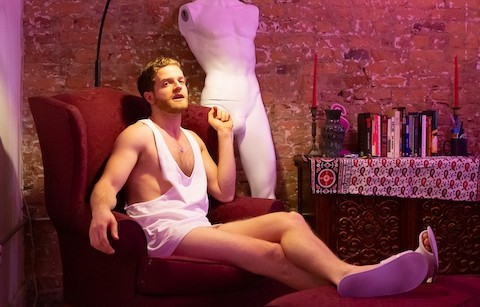 Sex work itself may be considered a kind of performance; there is some layer of separation, however thin or tenuous, between the body that’s paid for and the person who climbs into their own bed at night. If it allowed us a clearer glimpse beyond Tyler’s on-the-job performance, Bleach might really sear the senses.

Recent theatre features…
Black, Gay, and Striving to be Heard in ‘Choir Boy’ on Broadway: REVIEW
Towleroad’s Top 10 Plays and Musicals of 2018
The Most Interesting Part of Broadway’s ‘To Kill a Mockingbird’ Already Happened Off Stage: REVIEW
‘Clueless, the Musical’ Can’t Capture the Movie’s Bite Off-Broadway: REVIEW
Bryan Cranston Headlines a Bold but Bloodless ‘Network’ on Broadway: REVIEW
Broadway’s ‘The Cher Show’ Is a Feast for Fans and an Assertion of Legacy: REVIEW
Feel-Good New Musical ‘The Prom’ Wears a Big Heart on Its Puffy Sleeve – REVIEW
Broadway’s ‘American Son’ Starring Kerry Washington Is the Most Vacuous Kind of Race Play: REVIEW