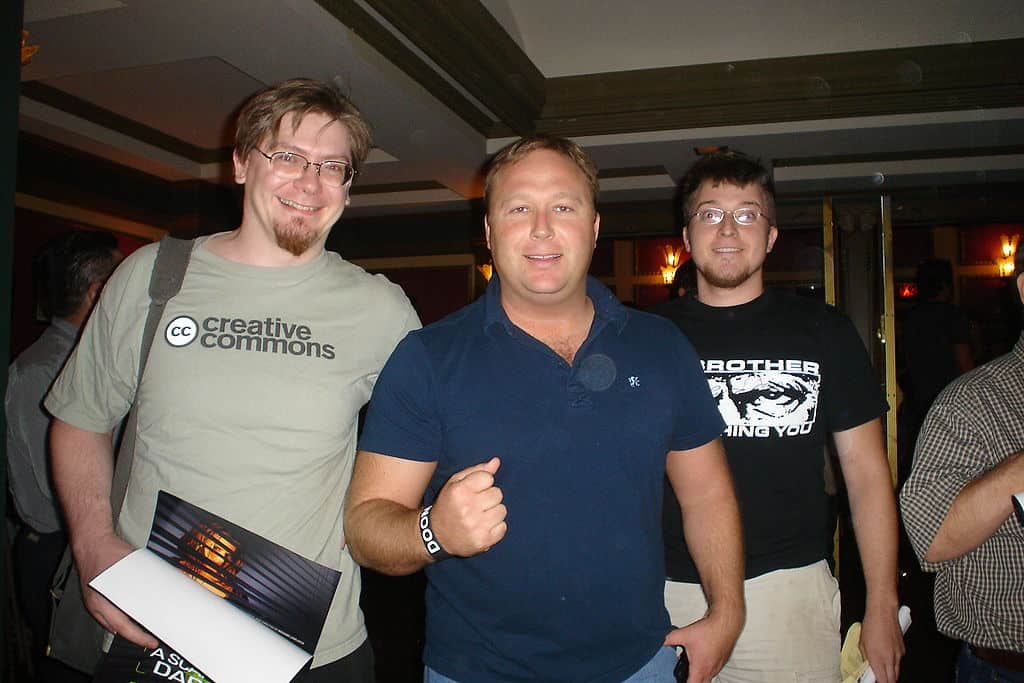 Last year,  after much sturm und drang about free speech and the role of social media,  Facebook followed Twitter, YouTube, Google,  and even Spotify  and banned hate monger and ultra-conservative pundit Alex Jones and his online show Info Wars from their platforms.

Today, we permanently suspended @realalexjones and @infowars from Twitter and Periscope. We took this action based on new reports of Tweets and videos posted yesterday that violate our abusive behavior policy, in addition to the accounts’ past violations. https://t.co/gckzUAV8GL

Now The Daily Dot has reported that Jones “InfoWars is now available on Facebook via three pages called NewsWars, InfoWars Live 24/7 and Prison Planet.TV. All of them run anti-LGBTQ content which conflates LGBTQ rights with pedophilia.”

All of the FB pages have been found to be active as of 9:30AM EST.

Jones has admitted that his company operates NewsWars and its related website, NewsWars.com, but he has denied personally running any of the Facebook pages. The Daily Dot says, in NewWars’ posts and videos, “Muslims, LGBTQ people, and immigrants are favored targets, and violence is often glorified.”

The Washington Post also questioned how Jones managed to get around the ban—both he and his followers which the Post put at over 300k.

It’s particularly shocking given that Facebook CEO Mark Zuckerberg himself stepped into the Info Wars fray especially after an incredibly critical profile came out in The New Yorker last year that among other things revealed Zuckerberg’s ignorance of the Facebook’s platform in propagating fake news.

As The New Yorker reported, “The idea that fake news on Facebook—of which, you know, it’s a very small amount of the content—influenced the election in any way, I think, is a pretty crazy idea,” he said. To some at Facebook, Zuckerberg’s defensiveness was alarming. A former executive told Wired, “We had to really flip him on that. We realized that if we didn’t, the company was going to start heading down this pariah path.”

In fact Zuckerberg only finally and personally moved against Jones on FB when Zuck received an open letter from two of the parents of one of the children massacred at Sandy Hook (Jones has continually maintained the massacre a hoax perpetrated by the Obama administration).

The couple feared for their life because responding to Jones’ denials had made them the target of his followers wrath.

On July 27th, according to The New Yorker it took down “four of Jones’s videos and suspended him for a month. But public pressure did not let up. On August 5th, the dam broke after Apple, saying that the company “does not tolerate hate speech,” stopped distributing five podcasts associated with Jones. Facebook shut down four of Jones’s pages for ‘repeatedly’ violating rules against hate speech and bullying. I asked Zuckerberg why Facebook had wavered in its handling of the situation. He was prickly about the suggestion: ‘I don’t believe that it is the right thing to ban a person for saying something that is factually incorrect.'”

Zuckerberg told The New Yorker then “that, after Jones was reduced, more complaints about him flooded in, alerting Facebook to older posts, and that the company was debating what to do when Apple announced its ban. Zuckerberg said, ‘When they moved, it was, like, O.K., we shouldn’t just be sitting on this content and these enforcement decisions. We should move on what we know violates the policy. We need to make a decision now.'”

We wonder what Zuckerberg thinks of Jones’ return to Facebook or even if he knows now?

Queries to Facebook from Towleroad have not been answered at press time.