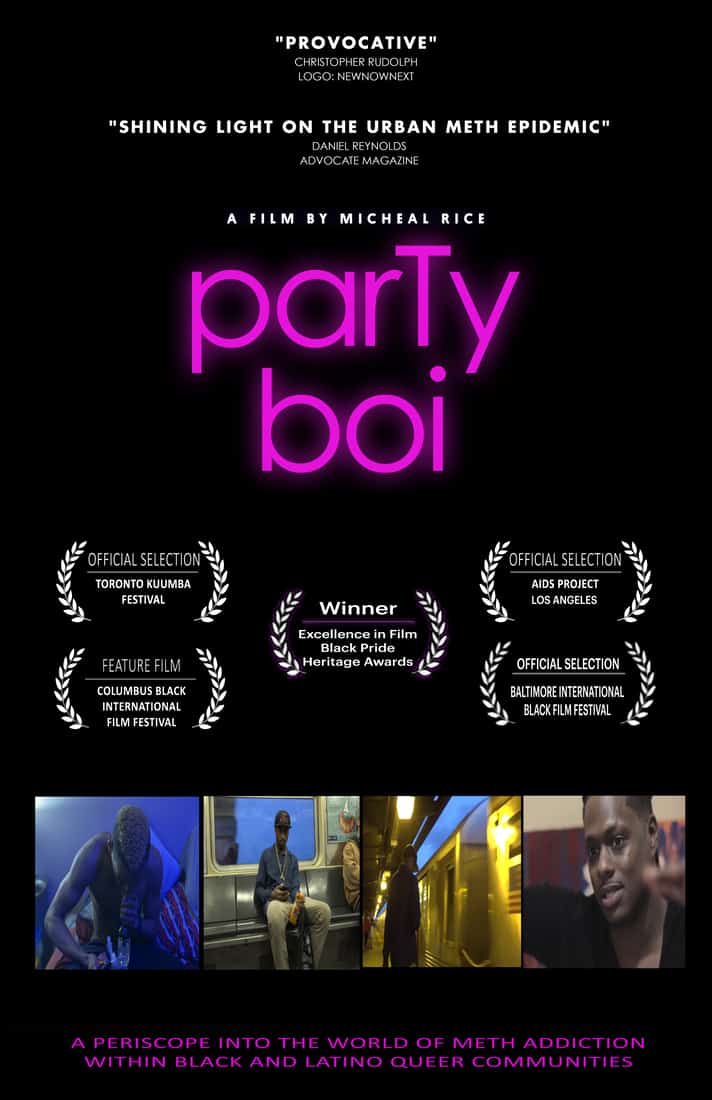 When partybois: black boys in ice castles premiered on the film festival circuit last year—many were shocked at how pervasive the crystal meth problem is and had not even considered how it affected the marginalized in our own communities.

Director Micheal Rice wasn’t surprised but he was and is saddened that one part in particular—a segment about  the “accidental overdose” of Gemmel Moore who died of a meth overdose at Ed Buck’s home. Buck is a powerful LA political donor—whose home was witness to another Black gay man’s overdose last week—a death that echoes Moore’s death in virtually every way.

Towleroad spoke to White about the film and Buck in particular.

Do you believe Ed Buck to be a serial killer of sorts as journalist Jasmyne Cannick  has suggested?

I am hesitant to solidify that Ed Buck is a serial killer, but he definitely appears to have the framework of  the making of one. Psychologically, I believe him to be a sadistic man who receives pleasure from the pain of others and in this case — the pain of disadvantaged young gay Black men.

Why do you think he targets Black men?

I believe Ed Buck has a slew of fetishes that leads him to use gay black men as an outlet for fulfillment. I think it’s an obsession, a super-humanization of black men overall that stems from slavery, believing that blacks are physically and sexually superior while whites are intellectually and emotionally dominant. Many clients/victims of Buck reported the constant use of the N-word during their visit, removal of their own clothes to wear items Buck lays out for them [ white long johns] and lastly to financially reward his guest by having victims or himself shoot large amounts of meth into their bodies to see the amount their bodies could withstand before passing out or overdosing… it’s sick, it is almost reminiscent of 19th century New Orleans serial killer Madame LaLaurie. He targets those young black men that are socially disadvantaged or in need of help with promises of financial reward or shelter in order to fulfill his slave play fetishes and meth induced like experiments.

How pervasive is the meth epidemic among Black gay men?

The meth epidemic in the Black and brown community is extremely widespread and growing every day. I started to see the rise of this foe in 2012-2013 when online dating apps and literature began to change or look different. I started noticing phrases and terms like party n play “PNP,” Tina[meth] or the use of emojis such as clouds and diamonds growing and becoming more prolific in day-to-day online conversations and profiles.

With little information or research on this matter I was able to pull data from the New York Times that stated substance abuse counselors in New York City noticed a shift in clients seeking help with meth addiction, at one-point majority of clients were white gay men but now most are Black gay men. When did this happen? How did this happen?

In my research for the party boi documentary I interviewed 102 individuals online, in bars, and via hook-up apps. 85 percent of these Black men informed me they were introduced to meth via their boyfriend or sex partner the other 15 percent through experimentation or were maliciously drugged from someone they hooked up with. The odd thing about the 85 percent who were introduced to crystal meth from their lover or boyfriend — and also informed me that their partner participated in sex work/escorting.

I believe that prostitution segued and exposed meth on a large scale into the Black queer community which in return elevated the HIV infection rate then lastly many turned to meth as a coping mechanism for HIV infection, addiction, homelessness and depression.

How did you get personally interested in this topic?

I became involved with the subject of crystal meth from personal experiences, having lost friends and family members to the addiction of this drug. I became increasingly irritated that it started trending in my community, so I felt it was my duty as an artist to create a body of work detailing the narrative that crystal meth is destroying LGBTQ people of color. I created the film party boi, black diamonds in ice castles as an answer to that need to create a space to speak about meth, addiction and depression. parTy boi, was curated to warn millennials of the dangers of meth as well as garnering an understanding of how it infiltrated our neighborhoods historically.

The story of Gemmel Moore became an impactful presence in the documentary. I wanted to humanize Gemmel because the media had made him to be a one-dimensional headline when in reality there were layers of complexities to his situation. I had the opportunity to interview and personally speak to his mother Latisha Nixon who fights everyday against the injustices of her son not only for being a Black man but someone of the LGBTQ community and I stand beside her along with political activist Jasmyne Cannick and many more seeking justice for Gemmel and informing the world about the ever growing epidemic of meth and calling out predators like Ed Buck taking advantage of the disadvantaged.

A screenshot below of the documentary’s critical and award highlights.
Notably —  Winner: “Excellence in Film” at Black Heritage Awards in New York City. (August 2018) 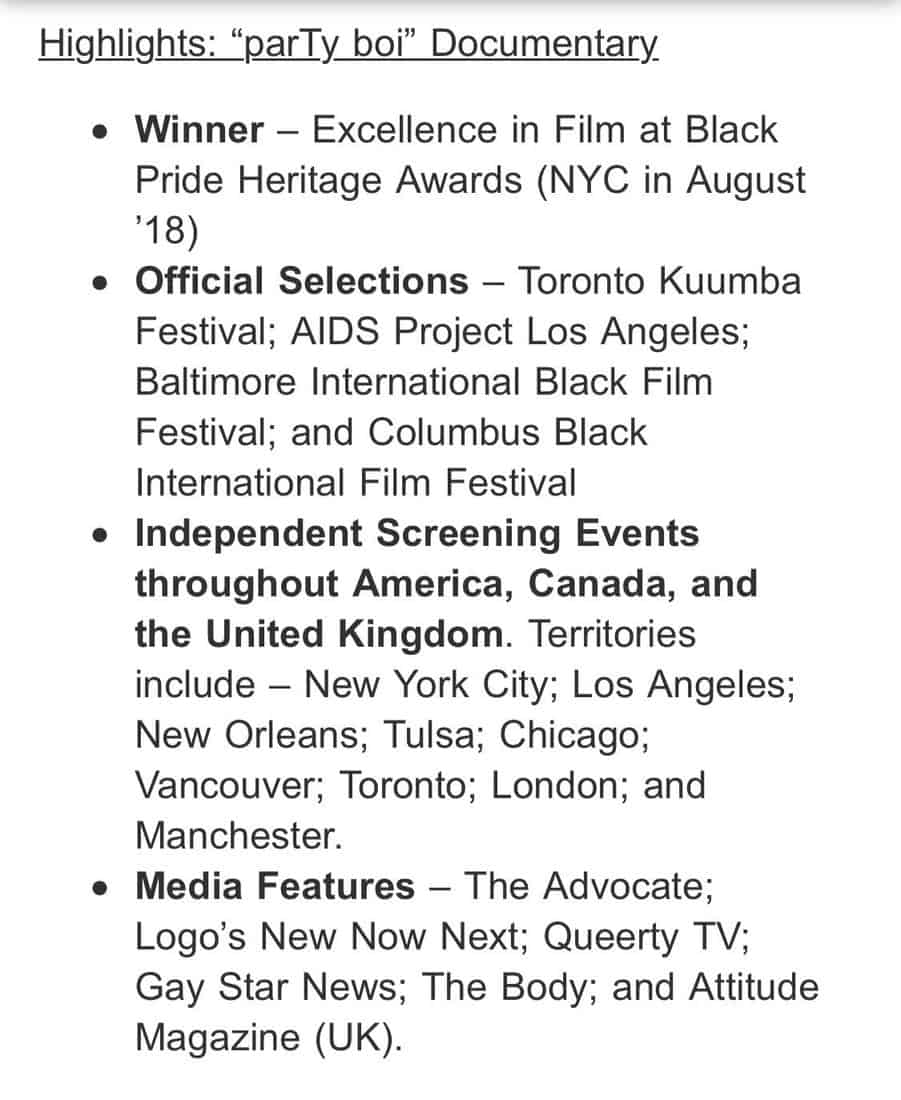 Currently, the only way to view parTy boi is to coordinate a screening event in the desired community. Those interested in that option would have to communicate with producer Alvin J. Woods directly. To date — this method has allowed the filmmakers the opportunity to screen the documentary approximately 20 different times across the country as well as twice in Canada and twice in the UK (London and Manchester). 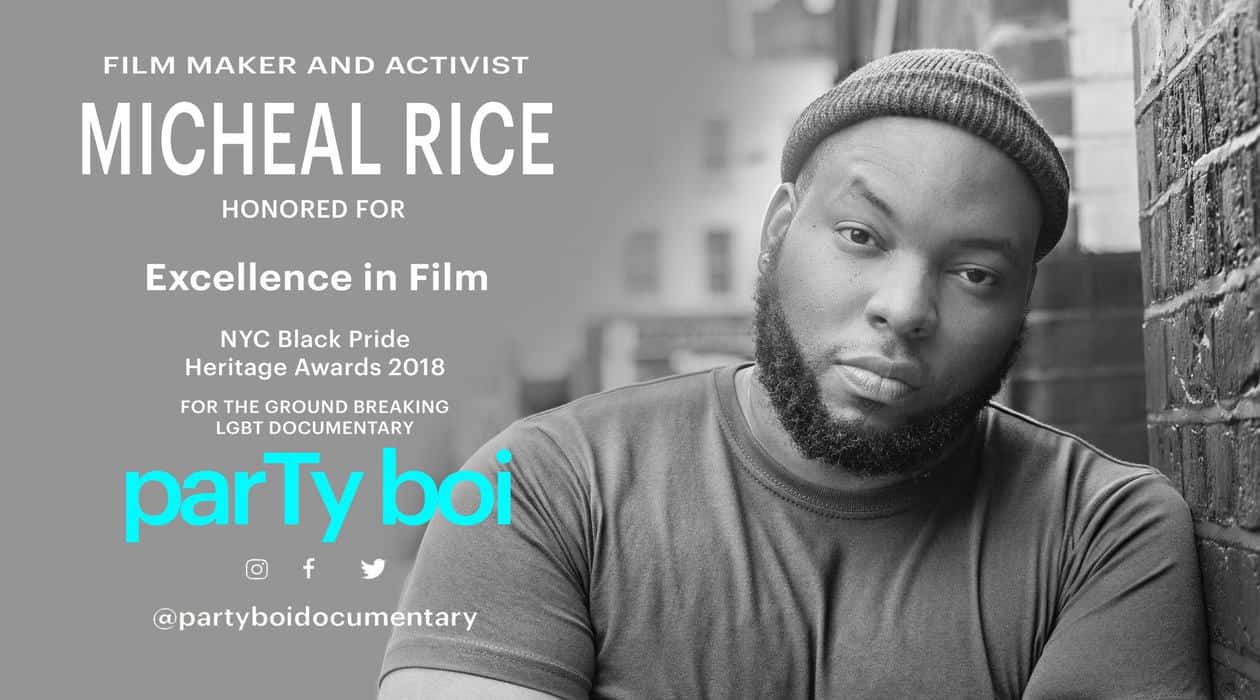 For screening information or to coordinate a screening event in your local community, reach out to Alvin J. Woods, at alvin@themediamodel.com.
Watch the trailer below.