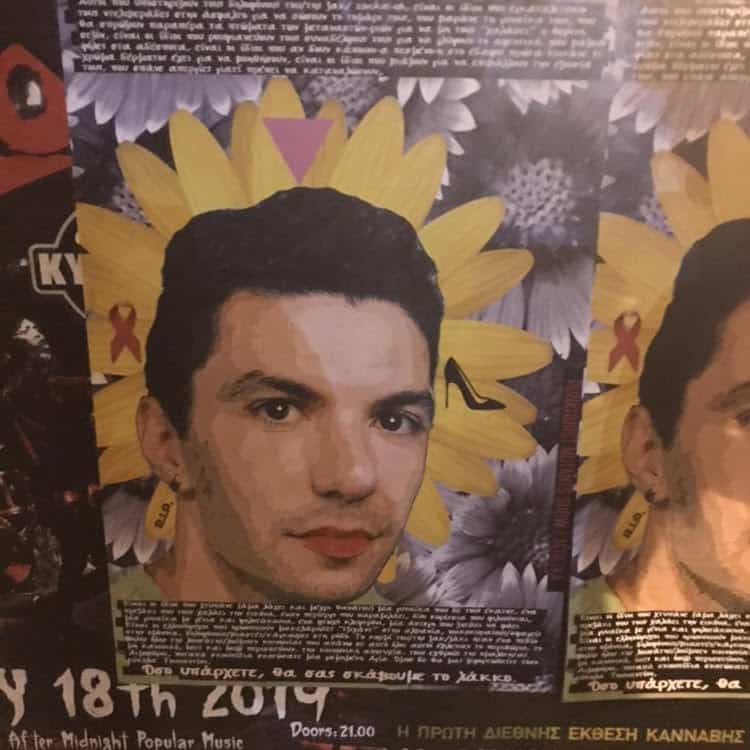 The photo above is a painting of Greek LGBTQ & HIV Activist Zak Kostopoulos  in the Exarcheia  neighborhood in Athens. Kostopolous was murdered in September. The Athens police have been charged with his death. Taken today by Perry N. Halkitis.

Over four months ago the first reports came out of Greek and Greek-American news outlets — a brave store owner had killed a “heroin addict” and  an “illegal immigrant” in self defense of the robbery of his jewelry store.

This narrative played well in the Hellenic Republic which has been decimated by a de facto economic war waged by the central bank and the Eurozone for the crime of being born Greek — a decade of austerity has led to one of the highest suicide rate spikes in the world (nearly 50 percent spike in 2017).

It’s also a place that has seen a sharp shift to the right and even the rise of a Nazi party called Golden Dawn in the Hellenic parliament.

Four months later and despite internal findings that found the police liable for his death we are no closer to the truth to what actually transpired that day.

No one has come forward and told Zak’s story.

Back in September the first outlet to identify the “burglar” as Kostopoulos was Pink News.

According to PinkNews, video footage was released, showing Kostopoulos trapped in a jewelry shop on Gladstonos Street. He attempted to break out of the shop’s front door with a fire extinguisher as a crowd gathered outside, including the shop’s owner. When he failed to break through the door, Kostopoulos crawled through a window, which required him to get on his hands and knees on broken glass.

Out magazine reported that, “As he [Kostopoulos] gets outside, the shop owner and another man can be seen kicking Kostopoulos repeatedly, with a final kick to the head that knocked him unconscious. Passersby attempted to intervene, and although police were in the vicinity, they failed to stop the attack. The mob can still be seen kicking him while he lies unconscious. The footage ends with police and emergency responders putting Kostopoulos sideways on a stretcher, as his hands appear to be cuffed behind his back. He died before reaching the hospital.”

What was particularly troublesome to me was the reluctance of the local media to sway from the drug addict narrative to the extent that some asked if Kostopoulos did indeed have a heroin problem — it was the ultimate pile on of stigma — as if that wasn’t enough he was also HIV-positive.

Kostopoulos wasn’t well known outside Hellas although what really is except for austerity stories and parties on Mykonos? He also grew up in the United States—another thing that stayed with me as that was often a fear I had as a child—having to return to the largely homophobic country.

The National Herald reported that Kostopoulos lived in the U.S. until he was 8 years old when his parents decided to move the family back, permanently, to their village of Itea Fokidas. In an earlier online interview Kostopoulos said that his parents’ choice to return to Greece had cost him his childhood. “Being eight years old and going from America, not just to Greece, but to a village in Greece, it’s a huge change, a cultural shock,” the late Kostopoulos said.

I can also imagine the fear he felt in a place where we’re told to trust in God and our countrymen while they proceed to beat you to death—where a humanitarian crisis goes largely un-noticed by the rest of the world—Zak’s death writ large is the story of Greece’s importance in the international spotlight.

So although I am happy as The Greek Reporter relayed in November  that the, “Police officers involved in the Athens beating death of 33-year-old LGBTQ activist Zak Kostopoulos now face charges of inflicting fatal bodily harm and will appear in front of the examining magistrate on Monday.”

And that, “An autopsy released in November revealed the cause of death, showing the thirty-three-year-old had died of a heart attack as a result of the beatings. He was not under the influence of any drugs at the time.”

I’ll never forget the early reporters or the passersbys who watched the assault unfold in front of them and recorded it on their devices—or the fact that it happened at all in the city that once gave birth to democracy.

Maybe we’ll never know Zak’s version of how these events culminated in his murder.