There is a traditional image of military might that emphasizes strength above all else, to the detriment of individualism and often humanity. We’ve seen this portrayed many times in disturbing fashion in movies and television (not to mention real life), as drill sergeants and other commanding officers work to crush the spirits of their charges and “toughen” them up so that their weaknesses will be rooted out. This can obviously have truly scarring effects, felt both during and after service. A powerful showcase of that phenomenon is on display in director Oliver Hermanus’ new film Moffie, opening Friday.

In the same way that Confederate battalions aren’t fondly remembered in America, white men who fought for South Africa in the 1980s aren’t really on the right side of history…

Those drafted to go to the Angolan border are indoctrinated to hate the twin enemies of communism and “die swart gevaar,” which translates to “the black danger.” Racism and homophobia are rampant among the young, overeager soldiers, a reality that devastates sixteen-year-old Nicholas Van der Swart (Kai Luke Brummer), who hides the fact that he is gay from a vicious group ready to attack even without the immediately-granted permission and orders of their commanders.

Moffie shifts tone considerably throughout its 104-minute runtime, opening with a family reception to see Nicholas off before shifting to the bleakness of the barracks that become even more vile when their residents are given the opportunity to take out their energy on those they have learned to hate. Overhead shots ominously show trains taking these young men to their new lives as they are shouted at and hustled out of vehicles to force an adjustment to military modality. There are more than a few unpleasant scenes featuring torment inflicted by experienced officers seeking to demean their supposedly uncooperative recruits, and that’s before outliers are targeted specifically for their sexual orientation, which is even more brutal and hard to watch.

Within this sometimes off-putting narrative is a story of intimacy and passion as Nicholas attempts to hold on to who he is and to connect with the few men who do not cast him off as an abomination to be stomped out. It’s hardly a reassuring representation of the human race since so many that he meets are capable of such cruelty and evil, but Nicholas serves as a stand-in for many who are able to blend in to their surroundings and not be noticed for some period of time. This film tackles many issues and doesn’t resolve them all, but there is a resonance to it that absolutely lingers.

Moffie will be released in select theaters and on digital and VOD by IFC Films this Friday, April 9th

Out Actor Colman Domingo Talks ‘Ma Rainey’s Black Bottom’, the Upcoming ‘Zola’. And, He’s Up for a SAG Award… 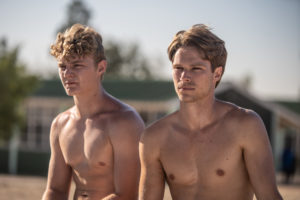