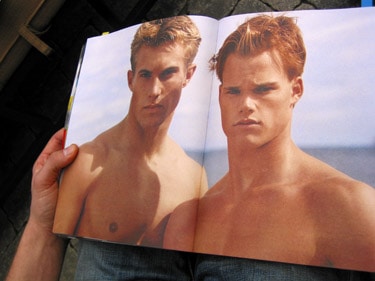 So yesterday I had to see my tax guy in Arcadia. Don’t ask where it is, I had to take four different freeways to get there. Aside from learning the hideous amount I owe in taxes this year, I also listened to Michael Silverblatt’s Bookworm on NPR in my car, which in my opinion is a form of masochism almost equal to the taxes. Not that I don’t like books, it’s just that listening to Silverblatt brings every uncomfortable geek memory I had from junior high school into the forefront of my consciousness. But once his voice gets started you just have to keep listening — it’s like crack for nerds.

But I digress. Silverblatt was talking to James McCourt about his book Queer Street: The Rise and Fall of an American Culture, 1947-1985, and it sounded fascinating. So fascinating I had to order it. Anyone read it? No, the picture above is not from Queer Street. It’s from A&F Quarterly, which actually has a storefront on Queer Street. Plus, I know you miss it. Has anyone noticed their naked boy ads creeping into the magazines again?