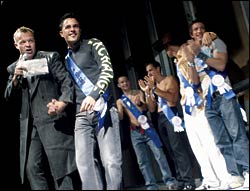 Michael Musto rips the Mr. Gay.com Universe presentation contestants whom he imagines were chosen “based on the profound literary value of their personal ads.”
(via queer day)

He also grabs some commentary from emcee Graham Norton on the Madame Tussaud’s waxwork nativity that was damaged recently in London. Says Norton, “I think they just put people who fitted the costumes. It’s so random. The public voted me, Samuel L. Jackson, and Hugh Grant as shepherds, I’m so sure! [And Bush] as a wise man! Maybe Americans voted for that, but definitely not the British!”

And on that note, a photo of the wise man’s White House Conference on the Economy held last week in Washington, where a prominently posted sign revealed that spelling remains as much an obstacle for this administration as finances. 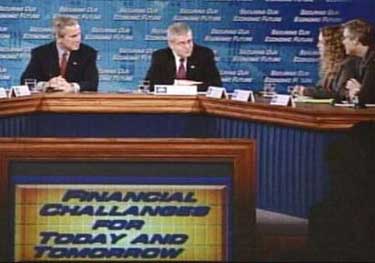