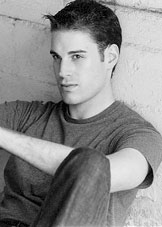 Tom Dolby‘s debut novel The Trouble Boy, now out in paperback, is a gay Bright Lights, Big City, the tale of a young man’s first year in New York after college. It’s a juicy story, complete with sex, drama, and as the San Francisco Chronicle Book Review notes, a main character whose “egocentrism is counterbalanced by relentless charm and earnestness.”

Since he kindly agreed to stop by Towleroad on his Virtual Book Tour today, I asked Tom to talk about some of his real-life inspirations for the characters in The Trouble Boy.

People always ask me this question about The Trouble Boy: How much of the novel is based on your life? Did all that stuff really happen to you? At Andy’s request, and in the spirit of a post-Valentine’s Day kiss and tell, I’ll let you in on a few similarities between my life and Toby Griffin’s.

Toby Griffin (aka The Trouble Boy)
When I came up with the name Toby, it was a happy accident that it was composed of the first two letters of my first name and the last two letters of my last name. While I am not Toby per se, I think it would be fair to say that the emotional arc of the story is similar to my own.

Jamie Weissman
Poor Jamie: everyone loves him, no one wants to date him. Jamie is a composite of a few neurotic close friends of mine. (“You know, like they do in New York magazine.” First person to email me who gets this reference wins a free book.) Did that incident in the closet really happen? Let’s just say I have a vivid imagination.

Donovan Tripp
This intrepid and adorable restaurant reviewer is a combination of several friends I was running around with in the late 90s. My best friend in high school also later became a food critic, which inspired Donovan’s profession.

Subway Boy
“Who is Subway Boy?” someone asked me recently. He’s a mix of my boyfriend from five years ago and a guy I met who was a science fiction editor, with whom I later–after finishing the book, funnily enough–ended up having a relationship. He’s much more the former than the latter, and Subway Boy, as I like to tell people, currently lives in London, where he will be for the next few years.

Real World Guy
Did I ever sleep with a cast member from The Real World? Come on, this stuff is fiction! Get your mind out of the gutter!

Army Guy
I’ll say this: I hope he’s not working at A&F anymore.

Isabella Griffin
Is my mother a fashion designer? No. Is she a fabulous, self-proclaimed fag hag? Yeah, pretty much.

Cameron Cole
Sorry, guys, he’s fictional. It’s too bad, because word has it that he’s quite cute.

Ariana Richards
Is Ariana based on celebrity publicist Lizzie Grubman? Not really. While the novel’s incident at the club was inspired by Grubman’s smash-up outside a Hamptons nightspot in 2001, Ariana is an amalgamation of every nightmare alpha-female publicist I’ve ever met.

Jordan Gardner
Think of every messed up starlet who’s ever graced Page Six. (La Lohan, anyone?) Multiply her times ten. There you’ve got the monster that is Jordan Gardner.

Lola Copacabana
Yes, it’s true: fabulous transsexual club diva Amanda Lepore (who adores the book, by the way) was the genesis for Lola Copacabana. While it’s not exactly a one-to-one match (Amanda doesn’t write a nightlife column, to my knowledge), it was she–along with a few other gender-bending creatures of the night–who inspired Lola’s antics.

The Trouble Boy is available here, but you can get one for free if you’re the first to email Tom with the answer to the trivia question he asked.

If you’d like to follow Tom on the rest of his Virtual Book Tour stops today, check out Backstory, Beatrice.com, Large Hearted Boy, Outminds, Pamie, SFist, The Bradlands, The Elegant Variation, and Zulkey.