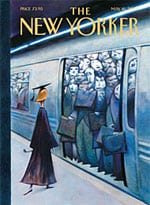 The New Yorker takes a look at various gay communities, evaluating the way crystal meth is being used and dealt with around the country. They paint a sad and bleak picture of a community which split in the 80’s when the AIDS crisis came into view and continues to fracture again as the spectre of crystal tears it apart. What they learned about use of the Internet seem obvious, yet still eye-opening:

“The results were hard to misinterpret: the Internet has turned out to be a higher-risk environment than any bar or bathhouse—men who meet online are more likely to use the drug, more likely to be infected with H.I.V., and less likely to use condoms.”

And I have to agree with Jeff Whitty, the writer of Avenue Q when he gets nostalgic for a time when there was more human contact involved in the gay social scene: “I don’t want to romanticize something that was often very hard and even dangerous. But I long for the days when people would actually cruise each other. I can’t remember what I was reading—I think it was Gore Vidal’s memoir, and he paints these pictures of being gay after the war, when you would follow someone for fifty blocks. It was a weird, funny ritual, but in a way it was actually more open. At least you could look at somebody, see how the person moved, interact. But that is now gone. Now we have the Internet when you want to hook up. You can get sex within minutes. Anonymous. No names. No commitments. No connections. Is that what we are really looking for?”