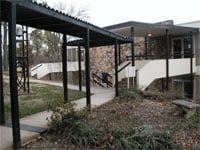 If you’ll remember, this ex-gay Christian facility was where MySpace Blogger Zach was sent by his parents to “cure” him of his homosexuality. The state Department of Mental Health and Developmental Disabilities has given the camp until September 23 to either obtain a valid license for operation or cease operations altogether.

The disturbing flipside to this news is that according to a letter from the Department of Mental Health, the facility “was providing housing, meals and personal care for mentally ill patients without a license.” Now the question I want to ask is, does the state of Tennessee view homosexuality as a mental illness, as the wording of this letter would suggest? If so, the state of Tennessee is certainly as misled as the ex-gay Christians running this self-hate facility.

(via wayne besen and raw story)