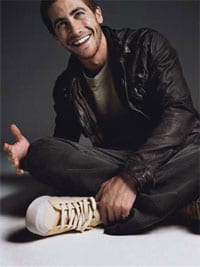 Gyllenhaal stresses to me the universality of Brokeback’s story (“My character could have been played by a woman and it would have made just as much sense,” he says), but I’m astonished when he says that he doesn’t believe Ennis and Jack are gay. “I approached the story believing that these are actually straight guys who fall in love,” he says. “That’s how I related to the material. These are two straight guys who develop this love, this bond. Love binds you, and you see these guys pulling and pulling and tugging and trying to figure out what they want, and what they will allow themselves to have.”

One of the film’s producers, James Schamus, is as surprised as I am when I tell him that Jake perceives his character as straight: “Did he really say that? Well, I suppose movies can be Rorschach tests for all of us, but damn if these characters aren’t gay to me. I think what Jake might have meant is that these guys lived outside of a social construction of a gay identity. There was no such thing as a gay identity for a cowboy in 1963.”

If you believe the rumors in the blogosphere, Gyllenhaal might be looking for his own gay identity. In the month before I met him, two seemingly conflicting rumors circulated. The first claimed that Gyllenhaal gave way to a body double for Brokeback Mountain’s nude scenes. The second said that he is bisexual and looking for an opportunity to come out.

Gyllenhaal flatly denies using a body double. As for his sexual orientation, he says this: “You know, it’s flattering when there’s a rumor that says I’m bisexual. It means I can play more kinds of roles. I’m open to whatever people want to call me. I’ve never really been attracted to men sexually, but I don’t think I would be afraid of it if it happened.”

I think I’ll just settle on calling him delicious.