A follow-up to the gruesome story presented last week by UK tabloid The Sun about a gay man accused of murdering his parents on Crete. 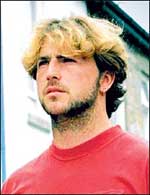 Ryan Johnson discovered his parents’ bodies gagged, bound, strangled, and stabbed. According to Ryan, he then became the subject of a smear and intimidation campaign by local authorities: “About 20 or 30 people came. You wouldn’t believe the mess they made of the house. I can’t explain it in any other way. They didn’t work in a logical way. They walked all over the evidence, they turned the house into a right tip, the forensics didn’t take my clothes for DNA, nothing. It was only in the third interview that I had a proper interpreter. All the time, they were keen to make me say certain things.”

They then arrested him.

Greek authorities reportedly based their arrest on the testimony of a friend of Ryan’s with whom he had been drinking that night. The friend, Andrew Bart, said that the family had experienced a “rift” because of Ryan’s sexuality.

Not according to Ryan:

“He strongly denied suggestions that his father never came to terms with his sexuality: ‘It’s absolute rubbish. My parents knew I was gay before I did, probably from the moment I said I wanted to be a dancer when I was a little kid. And they’d never made me feel ashamed of it, they’d never said anything bad. If they had a problem with it, they would never have supported me to do all the things I’ve done, the dance training…and then going off to do an English degree. They’ve stood by me through everything.'”

Ryan Johnson has been released on bail and says he’ll stay in Greece until his parents’ killers are found.