David Basri, a well-known Kabbalah preacher, has said that bird flu is God’s punishment for the campaign to legalize gay marriage in Israel. Sound familiar? Just another contingent of wingnuts scapegoating gays for the problems of the world. 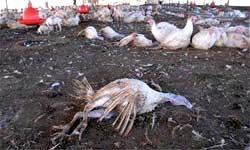 David Basri’s son quoted his father, according to PinkNews: “God punishes depravity first through plagues against animals and then in people. It should be obvious, he concluded, that bird flu is caused by political parties ‘strengthening and encouraging homosexuality.'”

The Head of British Liberal Judaism laughed at the wingnut: “This is so stupid it’s hardly worth responding to, but even scientists are not sure why bird flu has occurred, so I suppose this man is entitled to his flight of fancy. As far as I’m aware birds are not categorised by their sexuality, so what they have to do with gay marriage I don’t know. This Kabbalist seems to be muddled by his own mysticism and mystery. He must be a confused, sad man.”

Those Kabbalists. What would Madonna have to say about all this? I think I have an idea: This bird has flown.