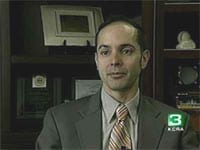 West Sacramento’s Mayor Christopher Cabaldon used his State of the City address to tell his constituents that he is a gay American. After coming out to his family last year, Cabaldon says he needed to come out in his professional life as well.

“This is something I needed to say in a direct way, not in a private meeting with a reporter or at a Chamber of Commerce meeting, but to really say it at a time when I knew the community will hear my voice in a direct way…If I’m ever going to have a personal life, I wanted to be open and direct about who I was with my constituents before that happened.”

Reaction to Cabaldon’s announcement has been “overwhelmingly positive” according to the Mayor, who hoped for a day when tolerance would alleviate public figures of the need to disclose such information. The announcement “drew an abrupt standing ovation.”

Said Cabaldon: “It should be the case where I shouldn’t have to say anything about it and wouldn’t feel the need to say anything. I went to Mayor Fargo’s State of the City Address the other day and she never at anytime announced that she was straight. I know she is. It shouldn’t be that way, but we’re not in that place.”