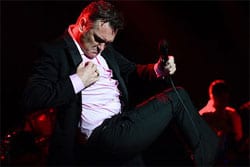 Morrissey has never been especially cheerful, but it sounds like he really got up on the wrong side of the bed in an interview he did recently with Uncut magazine.

When asked about his recent snubbing of a $5 million offer to reunite with his former bandmates, Moz said: “It has been 18 years since it ended; I don’t know them, they don’t know me, they know nothing about me, I know nothing about them. Anything I know about them is unpleasant, so why on earth do we want to be on stage together making music?”

He also cuts into the Royal Family: “The very idea of Charles being king is laughable.”

The Prime Minister and his wife: “I don’t like his face, I don’t like his expression. I don’t think anybody else does. And I can’t stand Cherie Blair’s face, I just wonder if there can ever be a photograph of her where she has her mouth shut.”

And celebrities in general: “”I was interested in intelligent celebrity. The word now is so base and disgusting and seems to apply to anybody that is anything but a celebrity.”

We wouldn’t have Morrissey any other way.

Will someone please save Whitney Houston!
If possible.

Arjan chats with Anastacia about her relationship with gay men, her record release plans, and her upcoming appearance at Palm Springs’ White Party. She tells Arjan that if she were a gay diva who could rule the planet she’d make three things happen: “Legalize marriage for all, cure for AIDS, and a pill so no body fat or love handles can exist.”

Finally, the Guardian recently ran a great profile on Frou Frou singer-turned-solo artist Imogen Heap and how hard work and a few strokes of luck have put her at the top of the charts. Of her gorgeous song “Hide & Seek” which was featured on The OC and subsequently became a huge hit, she says, “It’s just a magic thing that happened one evening. One night the computer died on me and I wanted to leave the studio having done something positive. I just played the first thing that came out of my head, and four and a half minutes later everything was there.”