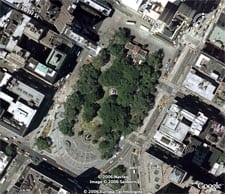 That basher picked the wrong target:

“George approached them, screamed that he hated ‘homos,’ told them to get out of his park, called them ‘faggots’ and gave the sergeant the middle finger, according to a Criminal Court complaint. Minutes later, George circled back and continued his anti-gay rant, threatened to assault them and spat on the sergeant’s foot, authorities said. With that, the cops arrested George, who struggled and said he didn’t want ‘faggots touching him,’ court papers state.”

The police officers were on the lookout for gang activity in the park when they got a rise out of George.