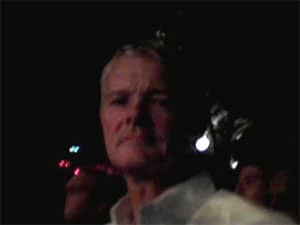 Various reports have surfaced that Mark Foley is not serving out any stint in rehab but is actually in hiding elsewhere. Just last week one of Wonkette’s readers reported a DC sighting, while over the weekend Foley was allegedly spotted in Austin, Texas enjoying a concert if you believe the fuzzy cameraphone evidence.

Did George Bush consider Mark Foley a political liability as early as 2004? Email records show that Foley was aware of “a continuing pattern of slights” in relations to Foley requests to gain access to the President when he visited Florida.

In other ‘naughty gay Republican congressmen’ news, Rep. Jim Kolbe (R-AZ) is being investigated for a trip he made to the Grand Canyon which included two former congressional pages. The three-day trip also included five current staff and Kolbe’s sister. The U.S. Attorney in Arizona began the investigation after allegations of “inappropriate behavior” by the Congressman surfaced.

NBC news interviewed those who were on the trip: “One participant, who requested anonymity, said he was uncomfortable with the attention Kolbe paid to one of the former pages. He was ‘creeped out by it,’ he said, adding that there was a lot of ‘fawning, petting and touching’ on the teenager’s arms, shoulders and back by Kolbe.” The page in question reported nothing improper and likes Kolbe to this day.

After the jump…a great column by Frank Rich which appeared in yesterday’s New York Times.

The Gay Old Party Comes Out

PAGING Tony Perkins of the Family Research Council: Here’s a gay Republican story you probably did not hear last week. On Tuesday a card-carrying homosexual, Mark Dybul, was sworn into office at the State Department with his partner holding the Bible. Dr. Dybul, the administration’s new global AIDS coordinator, was flanked by Laura Bush and Condi Rice. In her official remarks, the secretary of state referred to the mother of Dr. Dybul’s partner as his “mother-in-law.”

Could wedding bells be far behind? It was all on display, photo included, on www.state.gov. And while you’re cruising the Internet, a little creative Googling will yield a long list of who else is gay, openly and not, in the highest ranks of both the Bush administration and the Republican hierarchy. The openly gay range from Steve Herbits, the prescient right-hand consultant to Donald Rumsfeld who foresees disaster in Iraq in Bob Woodward’s book “State of Denial,” to Israel Hernandez, the former Bush personal aide and current Commerce Department official whom the president nicknamed “Altoid boy.” (Let’s not go there.)

If anything good has come out of the Foley scandal, it is surely this: The revelation that the political party fond of demonizing homosexuals each election year is as well-stocked with trusted and accomplished gay leaders as virtually every other power center in America. “What you’re really seeing is the Republican Party on the Hill,” says Rich Tafel, the former leader of the gay Log Cabin Republicans whom George W. Bush refused to meet with during the 2000 campaign. “Across the board gay people are in leadership positions.” Yet it is this same party’s Congressional leadership that in 2006 did almost nothing about government spending, Iraq, immigration or ethics reform, but did drop everything to focus on a doomed constitutional amendment banning same-sex marriage.

The split between the Republicans’ outward homophobia and inner gayness isn’t just hypocrisy; it’s pathology. Take the bizarre case of Karl Rove. Every one of his Bush campaigns has been marked by a dirty dealing of the gay card, dating back to the lesbian whispers that pursued Ann Richards when Mr. Bush ousted her as Texas governor in 1994. Yet we now learn from “The Architect,” the recent book by the Texas journalists James Moore and Wayne Slater, that Mr. Rove’s own (and beloved) adoptive father, Louis Rove, was openly gay in the years before his death in 2004. This will be a future case study for psychiatric clinicians as well as historians.

So will Kirk Fordham, the former Congressional aide who worked not only for Mark Foley but also for such gay-baiters as Senator James Inhofe of Oklahoma (who gratuitously bragged this year that no one in his family’s “recorded history” was gay) and Senator Mel Martinez of Florida (who vilified his 2004 Republican primary opponent, a fellow conservative, as a tool of the “radical homosexual agenda”). Then again, even Rick Santorum, the Pennsylvania senator who brought up incest and “man-on-dog” sex while decrying same-sex marriage, has employed a gay director of communications. In the G.O.P. such switch-hitting is as second nature as cutting taxes.

As for Mr. Foley, he is no more representative of gay men, whatever their political orientation, than Joey Buttafuoco is of straight men. Yet he’s a useful creep at this historical juncture because his behavior has exposed and will continue to expose a larger dynamic on the right. The longer the aftermath of this scandal continues, with its maniacal finger-pointing and relentless spotlight on the Republican closet, the harder it will be for his party to return to the double-dealing that has made gay Americans election-year bogeymen (and women) for so long.

The moment Mr. Foley’s e-mails became known, we saw that brand of fearmongering and bigotry at full tilt: Bush administration allies exploited the former Congressman’s predatory history to spread the grotesque canard that homosexuality is a direct path to pedophilia. It’s the kind of blood libel that in another era was spread about Jews.

The Family Research Council’s Mr. Perkins, a frequent White House ally and visitor, led the way. “When we elevate tolerance and diversity to the guidepost of public life,” he said on Fox News Channel, “this is what we get — men chasing 16-year-old boys around the halls of Congress.” A related note was struck by The Wall Street Journal’s editorial page, which asked, “Could a gay Congressman be quarantined?” The answer was no because “today’s politically correct culture” — tolerance of “private lifestyle choices” — gives predatory gay men a free pass. Newt Gingrich made the same point when he announced on TV that Mr. Foley had not been policed because Republicans “would have been accused of gay bashing.” Translation: Those in favor of gay civil rights would countenance and protect sex offenders.

This line of attack was soon followed by another classic from the annals of anti-Semitism: the shadowy conspiracy. “The secret Capitol Hill homosexual network must be exposed and dismantled,” said Cliff Kincaid of Accuracy in Media, another right-wing outfit that serves as a grass-roots auxiliary to the Bush administration. This network, he claims, was allowed “to infiltrate and manipulate the party apparatus” and worked “behind the scenes to sabotage a conservative pro-family agenda in Congress.”

There are two problems with this theory. First, gay people did not “infiltrate” the party apparatus — they are the party apparatus. Rare is the conservative Republican Congressional leader who does not have a gay staffer wielding clout in a major position. Second, any inference that gay Republicans on the Hill conspired to cover up Mr. Foley’s behavior is preposterous. Mr. Fordham, the gay former Foley aide who spent Thursday testifying under oath about his warnings to Denny Hastert’s staff, is to date the closest this sordid mess has to a whistle-blower, however tardy. So far, the slackers in curbing Mr. Foley over the past three years seem more straight than gay, led by the Buffalo Congressman Tom Reynolds, who is now running a guilt-ridden campaign commercial desperately apologizing to voters.

A Washington Post poll last week found that two-thirds of Americans believe that Democrats would behave just as badly as the Hastert gang in covering up a scandal like this to protect their own power. They are no doubt right. But the reason why the Foley scandal has legs — and why it has upstaged most other news, from the Congressional bill countenancing torture to North Korea’s nuclear test — is not just that sex trumps everything else in a tabloid-besotted America. The Republicans, unlike most Democrats (Joe Lieberman always excepted), can’t stop advertising their “family values,” which is why their pitfalls are as irresistible as a Molière farce. It was entertaining enough to learn that the former Christian Coalition leader Ralph Reed wanted to go “humping in corporate accounts” with the corrupt gambling lobbyist Jack Abramoff. The only way that comic setup could be topped was by the news that Mr. Foley was chairman of the Missing and Exploited Children’s Caucus. It beggars the imagination that he wasn’t also entrusted with No Child Left Behind.

Cultural conservatives who fell for the G.O.P.’s pious propaganda now look like dupes. Tonight on “60 Minutes,” David Kuo, a former top official in the administration’s faith-based initiatives program, is scheduled to discuss his new book recounting how evangelical supporters were privately ridiculed as “nuts” in the White House. If they have any self-respect, they’ll exact their own revenge.

We must hope as well that this crisis will lead to a repudiation of the ritual targeting of gay people for sport at the top levels of the Republican leadership in and out of the White House. For all the president’s talk of tolerance and “compassionate conservatism,” he has repeatedly joined Congress in wielding same-sex marriage as a club for divisive political purposes. He sat idly by while his secretary of education, Margaret Spellings, attacked a PBS children’s show because an animated rabbit visited a lesbian couple and their children. Ms. Spellings was worried about children being exposed to that “lifestyle” — itself a code word for “deviance” — even as the daughter of the vice president was preparing to expose the country to that lifestyle in a highly promoted book.

“The hypocrisy, the winking and nodding is catching up with the party,” says Mr. Tafel, the former Log Cabin leader. “Republicans must welcome their diversity as the party of Lincoln or purge the party of all gays. The middle ground — we’re a diverse party but we can bash gays too — will no longer work.” He adds that “the ironic point is that the G.O.P. isn’t as homophobic as it pretends to be.” Indeed two likely leading presidential competitors in 2008, John McCain and Rudy Giuliani, are consistent supporters of gay civil rights.

Another ironic point, of course, is that the effort to eradicate AIDS, led by a number of openly gay appointees like Dr. Dybul, may prove to be the single most beneficent achievement of this beleaguered White House. To paraphrase a show tune you’re unlikely to hear around the Family Research Council, isn’t that queer?

Previous Post: « More of Truman Capote’s Belongings to be Auctioned
Next Post: Fire Island Pines Pavilion Down, But Not Out »