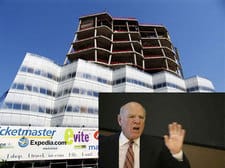 We watched earlier this year as the headquarters for Barry Diller’s InterActive Corp. rose on Manhattan’s West Side Highway.

Today Page Six reports that despite rumors Diller’s private bathroom in the building was intended to also serve as a bullet-proof panic room in case of attempts to kidnap or harm the mogul, the room serves no function other than to provide a luxurious royal flush.

Of the panic room rumors, Diller said: “Would that it were true. I am more vulnerably attackable in the bathroom than everyone else is at their desks. Not that I particularly want to advertise that.”

Now who might want to come after Diller? Certainly not the velvet mafia.

You may have missed…
Frank Gehry: Half Dressed [tr]
As Seen in Provincetown: Part One [tr]