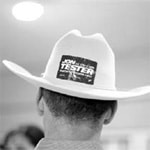 This gives Democrats and Republicans even numbers in the Senate. One race, in Virginia, is still outstanding, where Democrat Jim Webb leads Senator George Allen by a slim margin. Should Webb win that election, Democrats will hold majorities in both houses of the U.S. Congress.

I’d like to make a special shout-out to my dad, William Towle, who spent the weekend working the phones in Missoula for Jon Tester in Montana. You did it!