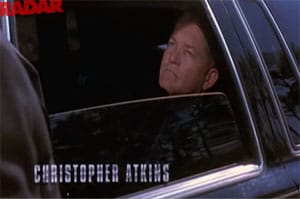 Mark Foley’s stay at the Sierra Tucson rehab facility has been extended beyond the standard 30 days, according to ABC’s The Blotter: “Today Foley’s attorney told the Associated Press that Foley will stay longer but did not specify how long.” Does anyone want to place any bets on the date? November 8 perhaps?

In other Foley news, yesterday Radar Online noted that Foley “was adept at playing the role of a Republican congressman trying to save at-risk kids.” Not only in Congress, but on screen as well. His bit part in the 2001 film The Librarians (later released on DVD as Strike Force

) features Foley playing a congressman who “hires a band of violent, jet-setting vigilantes to rescue his kidnapped daughter.”

And here’s the clip. The Blotter reports that the movie has been “flying off shelves.”

Perhaps once the dust has settled Foley can restart a career in acting. He’s had the practice.