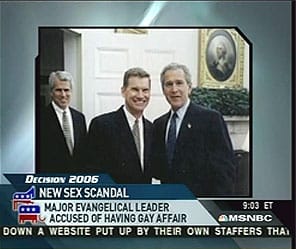 Ted Haggard told reporters today that he bought meth because he was curious, but got rid of it:

Then why, pastor Haggard, did you leave your gay hustler Mike Jones a voicemail inquiring about getting more?

He also told reporters that he received a massage from Jones but never had sex.