Sylvester Stallone, readying for his reemergence as Rocky Balboa, answered a few questions recently for film site Ain’t It Cool News. In response to a query about the 1974 film The Lords of Flatbush, Sly revealed that his would-be co-star Richard Gere believes to this day that Stallone was the source of one of the most famous urban legends of all time — Gere’s alleged trip to the hospital with a gerbil: 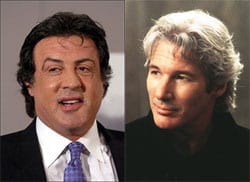 Stallone: “Yeah, the original part of Chico, which was played by Perry King, was originally supposed to be played by Richard Gere, but we never hit it off. He would strut around in his oversized motorcycle jacket like he was the baddest knight at the round table. One day, during an improv, he grabbed me (we were simulating a fight scene) and got a little carried away. I told him in a gentle fashion to lighten up, but he was completely in character and impossible to deal with. Then we were rehearsing at Coney Island and it was lunchtime, so we decided to take a break, and the only place that was warm was in the backseat of a Toyota. I was eating a hotdog and he climbs in with a half a chicken covered in mustard with grease nearly dripping out of the aluminum wrapper. I said, ‘That thing is going to drip all over the place.’ He said, ‘Don’t worry about it.’ I said, ‘If it gets on my pants you’re gonna know about it.’ He proceeds to bite into the chicken and a small, greasy river of mustard lands on my thigh. I elbowed him in the side of the head and basically pushed him out of the car. The director had to make a choice: one of us had to go, one of us had to stay. Richard was given his walking papers and to this day seriously dislikes me. He even thinks I’m the individual responsible for the gerbil rumor. Not true… but that’s the rumor.”

I dunno. All that macho posturing and talk about dripping fluids, hotdogs, and the warm back seat of a Toyota makes me think that the gerbil tale isn’t the only fantasy Stallone has been holding on to after all these years.