Vanity Fair digs into the Mark Foley saga, providing a vivid timeline of events that led up to the congressman’s downfall, as well as the damage control attempted by those around him, particularly Jeff Trandahl and Kirk Fordham. Foley’s boozed up trips to the page dorm were one of the first real breaking points: 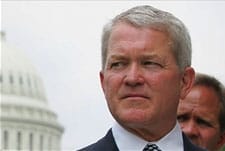 Around 2003, Fordham recalls, he took a call from Jeff Trandahl, then clerk of the House: “We have a problem The congressman showed up at the page dorm last night. He appeared to have been drinking, and he was turned away at the door.” Fordham remembers agonizing with Trandahl over what to do about this overt display of uncontrolled behavior. Obviously his mild warnings to Foley were not having an impact.

And the moment that everything came unhinged:

After Kello had read Fordham only a few lines, Fordham cried, “Stop! That’s all I need to know!” He heard female campaign workers weeping on the other end of the phone. When he hung up, he says he saw Foley, who was joining him on the patio, looking scared. Fordham told him the news.
“Are those instant messages authentic?” he asked Foley, who turned away, mortified.
When Foley looked back, he said, “Probably.”
“Probably?”
“Yeah, I’m sure they’re real,” said Foley.
Nicolson joined them. “Liz, I’ve been stupid,” said the congressman.
“Mark, I don’t know how you can go on in this race,” said Fordham. “Do you really want to spend the next 40 days of the campaign running around your district explaining sexually explicit e-mails to pages to your constituents?” 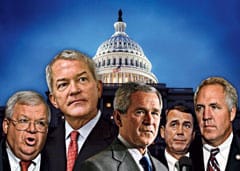 Fordham thought he made it clear that his old boss needed to quit, but Foley couldn’t bring himself to do that. The N.R.C.C. headquarters was around the corner, and Fordham made it his next stop. There he found Representative Reynolds and Speaker Hastert. But before he could finish relaying the awful news, Reynolds’s face got purple and he began to shout, “He needs to resign, and he needs to do it right now!” The Speaker just sat there, silent, according to Fordham: “He didn’t react at all. This was weeks before the election, and they’re thinking how this is going to impact us.”

The gist of the juicy piece is that Foley was a ticking time bomb: “Everyone knew Mark Foley was gay. Everyone. And everyone who had a stake in his success—party, press, parents, staff, supporters, and pages—conspired for their own purposes to keep the closet half closed.”