Although sources tell the SF Chronicle that on Tuesday police recommended criminal charges against up to six people in the New Year’s Eve bashing of Yale singing group ‘The Baker’s Dozen’, prosecutors have sent police back for more investigation, according to the paper. 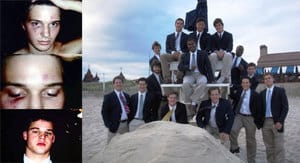 From the Chronicle: “It is unclear what more police need to do to complete their investigation. The police have been faulted for not acting to make arrests on the night of the incident, but have said that they did not have enough information to go on.”

District Attorney Kamala Harris released a statement on Wednesday: “The SFPD provided the D.A.’s office with information gathered to this point, and their investigation continues. The case will be reviewed for charging when the investigation is complete.”

A former prosecutor and policeman, and now attorney for two brothers detained but released by the police, Frank Passaglia, expressed little surprise that the D.A. had sent the case back to authorities: “If I was the D.A., I’d send it back too.The Police Department, because of all the pressure, wants to put it in the lap of the D.A. The fact of the matter is that it’s not ready for reviewing or for charging. Everyone was intoxicated. The Baker’s Dozen is not the angelic choirboys they are being made out to be — they were drinking, too.”

With three sons of a prominent San Francisco pediatrician accused in the beating, is there any hope for this political hot potato to become anything but a ‘blame the victim’ incident in which the attackers, who allegedly pulled their punches while shouting anti-gar slurs, get off easy? Wait and see.