Sounds like the new movie Wild Hogs digs up some of the same tired gay jokes: 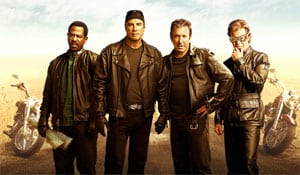 “But it isn’t long before the humor reaches a lowest common denominator level, much of it, strangely enough, centering on the theme of homosexual panic. From the quartet’s disturbing encounter with a gay motorcycle cop (funnily played by the normally macho John C. McGinley) to the endless gags revolving around Travolta’s discomfort with Macy’s physical familiarity and throwaway bits like an effete male singer performing a Pussycat Dolls song, the film approaches a level of offensive stereotyping not seen since Cruising*.“

It’s nice to see that critics are voicing their disgust more and more at gay stereotypes they view as offensive. Of course, seeing John Travolta and William H. Macy getting physical is enough to cause anyone to panic.

*Coincidentally, Cruising, a movie which its director notes “split the gay community”, is getting a re-release on DVD this fall, with a premiere in Cannes.

You may have missed…
Travolta’s Wild Hogs: A Movie Title That Isn’t Kidding [tr]