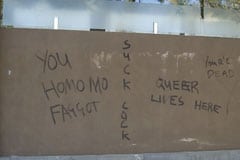 Along with the vandalism, a note was left behind which read: “you are going to die soon, you pedophile prick”.

Jarrod and Jon believe the same men were behind a second attack late last month, in which they scrawled graffiti on an outside wall of the property.

An investigation is underway.

You may have missed…
60-Year-Old Australian Man Bashed, Sexually Assaulted by Gang [tr]