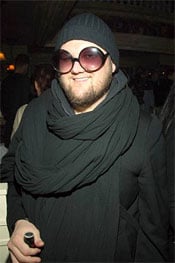 “It’s tough because he talked so much shit about me in the past. And it’s hard when you’re trying to figure your business out. It’s fine. Power to him. He’s having his heyday, but I also don’t think he’s an authority on any designer’s life. He went to school for sculpture or something. I don’t think that he’s ever, to my knowledge, started a fashion line and therefore should not be the adviser or the fuckin’ creative director … how dare you pretend to know what I should be doing with my company? It’s none of your business, dude — you’ve never started a fashion line. You’ve never initiated showing at Bryant Park on your own so don’t tell me what my time line is to show at fuckin’ Bryant Park.

He doesn’t know what I want to do. Maybe I want to fuckin’ take a piss off the Empire State Building and call it fashion. But that’s my fuckin’ prerogative. I just hate that because middle America looks at him like, He’s so nice, he’s like a father to them. On the show he was, sure. I’m not bitter about the man. It’s kind of hurtful. At one point he said I was an embarrassment because I didn’t show yet. And it’s like, fuckin’-A, man. Maybe next season they can make Tim Gunn show a line. Five months. We’ll see how good it is. But don’t worry. I’ll be fine.”

Not bitter, not bitter at all. Here’s the rest of the interview…