Queen Latifah is starring in the HBO movie Life Support which premieres on March 10th and tells the story of Ana Wallace, a woman who contracted AIDS from her husband, an intravenous drug user. In a recent effort with MovieWeb, Latifah had plenty to say about the disease, its prevention, and those who suffer from it: 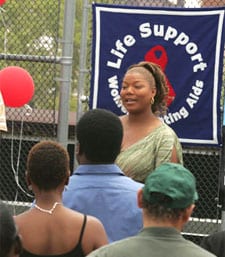 …That was the problem right off the bat with AIDS. We looked at it as a gay man’s disease, and we let everybody else catch it because we told them it was just you because we were prejudiced as a country against gay people, and we are to this day. So because of that, now everybody is susceptible to it. It’s just the same way you put drugs in a black community. You can’t put drugs in one community. Drugs feel too good. So whoever gets a hold of it is going to do it. Now everyone’s community is affected by it.

…When we understand that we are a human race, what affects you affects me, what affects her affects you and so on and so on, then we’ll look at this thing for what it really is. It’s a disease that’s out to kill all of us. It’s out to live in all of our bodies, and we’re out to keep it out. It’s that simple with HIV and AIDS at the end of the day. What will make it continue is our prejudices, our ideas about it, and the fact that we don’t look at ourselves as one giant community and protect each other’s children and protect each other’s wives, and deal with our issues.”