This just in from the Denver Post. Ted Haggard is not gay! 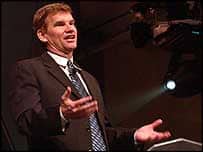 Haggard, who is apparently ready to jet off to Iowa or Missouri to become a psychologist, told a four-member oversight board that after three weeks of intense counseling he is now “completely heterosexual” and that “his sexual contact with men was limited to his accuser” according to one of the pastors on that board.

Amazing. And James Dobson said it would take 4 or 5 years!

Haggard breezed through his therapy almost faster than Isaiah Washington. These guys are fast.

Said the pastor overseeing Haggard’s progress: “He is completely heterosexual. That is something he discovered. It was the acting- out situations where things took place. It wasn’t a constant thing. If we’re going to be proved wrong (about Haggard only having contact with Mike Jones), somebody else is going to come forward, and that usually happens really quickly. We’re into this thing over 90 days, and it hasn’t happened. Nobody is saying he can’t go back into ministry. Somewhere down the road, that could very well happen, and that would be wonderful.”

Over the weekend, Haggard sent an email to members of his New Life church announcing that he was leaving Colorado Springs and intended to settle in Missouri or Iowa and pursue an online degree in psychology.

Previous Post: « Ellen DeGeneres Glams it up on W
Next Post: A Month of Culture in London includes Kylie’s Hotpants »