Scientists have detected a “long sought site of vulnerability” in the AIDS virus which might be targeted with a vaccine aimed at thwarting initial infection, U.S. National Institutes of Health researcher Peter Kwong said Wednesday: 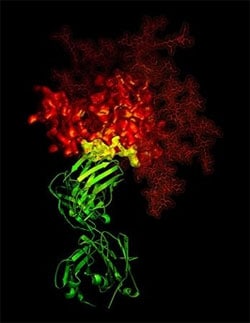 “Having that site and knowing that you can make antibodies against it means that a vaccine is possible. It doesn’t say we’ve gotten there. But it’s taken it off the list from an impossible dream and converted it to something that is a (mere) technical barrier.”

Using “atomic level images” of the virus, scientists observed it “in a biological handshake with the immune cells it attacks” and noticed a place on the HIV virus which might be vulnerable:

“They revealed the structure of a protein on the surface of HIV as it looks while the protein is bound to an infection-fighting antibody. They said this protein, called gp120, seems susceptible to attack by this antibody, which is called b12 and is capable of broadly neutralizing the virus.”

Dr. Gary Nabel, an NIH vaccine expert and a co-author of the research, called the new findings “certainly one of the best leads to come along in recent years”.

NIAID Director Dr. Anthony Fauci agreed, but cautioned that a vaccine may still be years away: “I don’t think there’s any one particular thing that, in and of itself, is the show-stopper. But I don’t think we could really make substantial, fundamentally scientifically based progress until we got this very important information.”