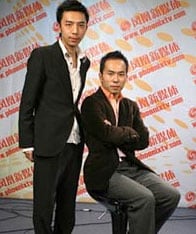 Tongxing Xianglian or Connecting Homosexuals, China’s first show dedicated to gay issues, is set to launch on Thursday, according to the Associated Press: “The new show will explore homosexuality from legal, parental and sociological perspectives, dealing with issues like gay marriage…The program will also feature a friend-matching portion.”

The show’s host, Didier Zheng, is a France-educated activist at the Chi Heng Foundation, a group which works to fund AIDS education programs and help those afflicted with the disease. Said Zheng: “I hope to convey my love in caring for gays, my hopes for them to get better recognition in society.”

The show’s producer, Gang Gang, said that the goal of the show is to put a public face on homosexuality and improve Chinese understanding of gay people. Said Gang: “There are many people in China’s gay community, but people don’t have a deep enough understanding about this community. This community faces a lot of trouble and difficulties. They face a lot of pressure.”

According to China News, Qiaoqiao, the owner of the “Feng” lesbian bar in Beijing, and the first Chinese lesbian singer to come out, will be the show’s first guest.

After being broadcast on the web at Phoenix TV, clips from the show will air over satellite TV, though may face censorship from the Chinese government. The extent to which the show may be censored is unclear.

You may have missed…
Leslie Kee Exhibit Too Hot for Hong Kong? [tr]