An Ethiopian Orthodox church just outside Addis Adaba claims its “holy water” has the power to cure AIDS. A British reporter says it’s a scene which makes him think of the Holocaust: 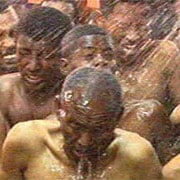 “Naked men, women and children, some of them in chains to prevent them escaping, cower in front of the men in charge in a dimly-lit room in the church of St Mary on Mount Entoto….These people fear death, but they believe that coming here will prolong their lives. It is more likely to have the opposite effect…Every day, thousands of people with the virus come here to be ‘baptised’, though the act is performed without ceremony and in a way which seems brutal to outsiders. Plastic jerry cans are filled with water from a pool, and passed along a human chain to priests dressed like deep sea fishermen. The bright yellow waterproofs protect them from the drenching they administer to their congregation. They hurl the water over the mass of people kneeling in front of them who shriek and scream, either through devotion or the simple shock of the cold water hitting their naked flesh…Some cried out for the demons to leave their body, while priests hit them with wooden crosses. Many of them clutched their babies while the water was is shaken from the plastic containers. It is an extraordinary sight.”

The brainwashing power of Orthodox religion at its worst.