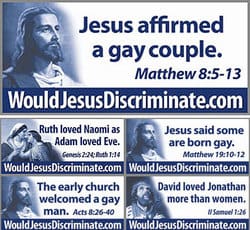 According to Faith in America, the five billboards (pictured) direct viewers to a website that provides support for the claims made on each.

Said Rev. Jimmy Creech, Executive Director of Faith In America: “In the past, many Christians misused the Bible to support slavery, oppose equal rights for women, and oppose interracial marriage. They went so far as to accuse people on the other side of being unbiblical. The same thing is happening again with respect to same-gender relationships. It has to stop.”

Added Pastor Jeff Miner of Jesus Metropolitan Community Church: “Right now, most people think this is a debate between people who love the Bible – conservative Christians – and people who want to throw out the Bible – godless homosexuals. Nothing could be further from the truth. Our Church welcomes hundreds of devout gay Christians who love the Bible deeply. Our goal is to rescue the Bible from misinterpretations driven by cultural prejudice, so its true message of grace, hope, and peace can come through.”

The Indiana legislature recently killed a proposed ban on same-sex marriage despite dogged efforts by religious and “pro-family” conservatives (including Indianapolis Colts coach Tony Dungy) to pass it.

The billboard campaign is slated to remain up for a month.