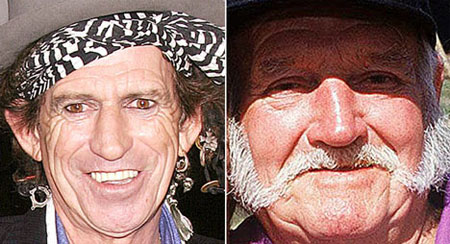 Rolling Stone Keith Richards: “The strangest thing I’ve tried to snort? My father. I snorted my father. He was cremated and I couldn’t resist grinding him up with a little bit of blow. My dad wouldn’t have cared – he didn’t give a s***. It went down pretty well. And I’m still alive.”

Incidentally, Richards looked like death before he inhaled. His father (above, right) died in 2002, but his mother Doris is still alive. Of course now she’s wondering where she’ll end up.

Of his worst drug experience, Richard said: “It was when someone put strychnine in my dope. It was in Switzerland. I was totally comatose but I was totally awake. I could listen to everyone, and they were like, ‘He’s dead, he’s dead!’, waving their fingers and pushing me about, and I was thinking, ‘I’m not dead!’. I’ve no pretensions about immortality – I’m the same as everyone else – same as you, same as everybody, I’m the same old b******, just kind of lucky. I was number one on the Who’s Likely To Die list for ten years. I mean, I was really disappointed when I fell off the list.”