Coulter’s ode to Jerry Falwell is a real gay-hating gem. Here are a few choice excerpts. 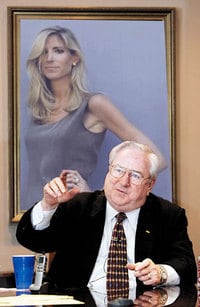 Coulter: “Let me be the first to say: I ALWAYS agreed with the Rev. Falwell. Actually, there was one small item I think Falwell got wrong regarding his statement after 9/11 that ‘the pagans, and the abortionists, and the feminists, and the gays and the lesbians — who are actively trying to make that an alternative lifestyle — the ACLU, People for the American Way, all of them who have tried to secularize America. I point the finger in their face and say, ‘You helped this happen.” First of all, I disagreed with that statement because Falwell neglected to specifically include Teddy Kennedy and ‘the Reverend’ Barry Lynn.”

And that’s just the beginning of a lengthy anti-gay, anti-liberal rant:

If you’re interested in reading the rest, which includes her encyclopedic knowledge of the culture’s grasp of Tinky Winky, click here.