Superior Aircraft Services Monday took action and fired Jethro Monestime, a 23-year-old employee who last week played an anti-gay passage from the Bible’s Book of Leviticus over the PA system at the Ft. Lauderdale-Hollywood International Airport twice. Coincidentally (or not so coincidentally) Anthony Niedwiecki (left) and his partner Waymon Hudson had just arrived at the airport’s baggage claim, where they heard the message. 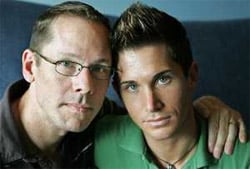 According to what Niedwiecki told Towleroad shortly after the incident, “It was a recorded message and basically said that ‘a man who lies with another man as he would a woman is subject to death.'”

In a letter, Monestime’s employer Superior Aircraft Services, apologized to the couple as well as to the Broward County Aviation Department, the Broward Sheriff’s Office, United Airlines and the South Florida community.

The Miami Herald: “Because he worked for a private contractor, Broward officials could not fire him. But his employer, Superior Aircraft Services, did. ‘This action in no way reflects the views of Superior, its owners nor its employees,’ said a statement from the company. He will not face criminal charges, BSO said. The recording played over the PA system was actually a verse from the Old Testament book of Leviticus, condemning homosexuality. Monestime told BSO he downloaded the message to his cellphone and played it over the loudspeakers — not once but twice — about 1 a.m. May 1.”

Although the company declined to give specific details about how they discovered it was Monestime behind the ‘prank’, they did tell the paper that his possession of a security badge, an employee code, and knowledge of his location in the airport at the time made him the prime suspect.