Michigan Supreme Court to decide whether or not partners of gays and lesbians employed by public universities and state and local governments should be able to receive health benefits: “The appeals court in February cited Michigan’s 2004 voter-approved constitutional amendment against gay marriage — which makes the union between a man and woman the only agreement recognized as a marriage “or similar union for any purpose” — as also barring domestic partner benefits for the same-sex partners of public employees.” 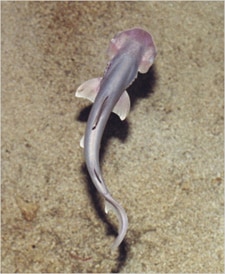 Immaculate conception: Hammerhead shark gives birth having had no contact with males. “This form of asexual reproduction, called parthenogenesis, has been found in other vertebrate species, including some snakes and lizards. But this is the first time it has been documented in a shark.”

Attorney General Alberto Gonzales may have obstructed justice as recently as March by attempting to “shape” Monica Goodling’s testimony before the congressional hearings.

Tremont Street in Boston the latest gay ghetto to dissipate.

“Bridal shop” for gays opens in Barcelona. Owner: “I saw the opportunity to do business after the law was approved. I didn’t know of any other country that had a shop or boutique for gay weddings. It will be an exclusive and personal product for a special day. It was obvious that gays, who also marry, needed their own bride shop.”

Does Dane Cook get this week’s Photoshopped body award?

Irish priest from Feakle Parish apologizes to congregation for breaking his law of celibacy after photos published on a gay website.

As Connecticut awaits gay marriage decision, the noise does not subside: “Motorists sounded their horns in support of the gay rights activists in front of the state Supreme Court today. They were trying to influence the seven justices inside who are contemplating whether or not to give same sex couples full marriage rights under the state’s civil unions law. A much larger crowd across the street at the state capitol celebrated the withdrawal of a same sex marriage bill from the general assembly but members of the Family Institute of Connecticut are still fearful that the state Supreme Court will make it happen without the legislature as happened in Massachusetts.”

Previous Post: « Josh Holloway: Cool Water not to be taken Literally
Next Post: Towleroad Guide to the Tube #136 »