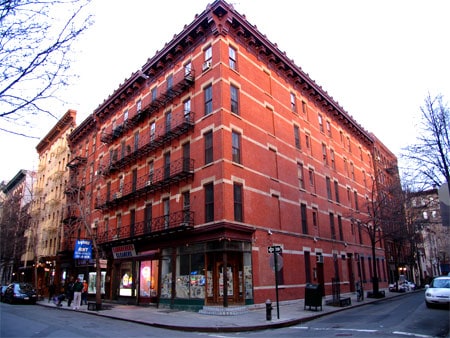 The L.A. Times ran an article today on the changing face of New York’s West Village, the piers, and Christopher Street, where today youths congregate on a nightly basis, drawn from all parts of the city. Some longtime residents don’t like it, and the issue reflects a clash in both age and race. 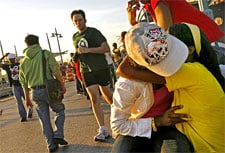 “Jay Jeffries, 65, is white and gay. He has lived for 40 years in the West Village, where he participated in the first gay rights marches. From his second-floor window, he watches the roller-skating boys with boomboxes pressed to their ears and the fistfighting girls wearing do-rags and jerseys. He has never felt so out of place. Residents like Jeffries say they want the gays of the hip-hop generation to take their rowdiness elsewhere. They have demanded stricter curfews at the pier. They have lobbied to close a train stop on weekends to make it more difficult for people from New Jersey to travel to the West Village, and to ban loitering in their neighborhood. They have suggested that park patrol officers — who police the pier — carry guns…Most of the gay teens and 20-somethings who flirt, kiss, smoke, dance and gossip on the pier, across the street from apartments and brownstones, don’t know about the Stonewall riots, Jeffries said. ‘They’re another generation. These are the people who got the rights’ because his generation fought for them. ‘There’s no willingness to interact,’ Jeffries said, ‘or to really treat us with the respect we deserve.'” 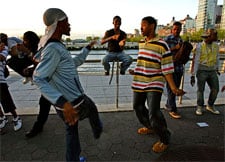 “It takes 19-year-old Danny Watson an hour and a half — catching a bus, to a ferry, to a train — to get to the West Village from Staten Island. On this evening, he arrived in a Ralph Lauren shirt and jeans, and Gucci slip-on canvas shoes. He wore his hair in a low-cut Mohawk, and kept a Bluetooth device on his ear to talk on his cellphone. Surveying the chic crowd, he said, ‘This area is monumental.’ Watson discovered the pier after attending the gay pride parade three years ago. It was the first time he felt proud of his sexuality. In Staten Island, his neighbors and friends are mostly heterosexual Italians and Catholics, he said. There is a gay scene there, but Watson said he doesn’t fit in because he is black. He has eight sisters and he lives with his mother. They accept his orientation, he said, ‘as long as I don’t throw it in their face.’ People need to understand, he said, that the face of the gay movement has changed, and the West Village should not be scared of it. ‘You have to look at the person inside and not just view them as ‘oh, these kids have all these crazy colors on, they’re always loud and laughing,’ ‘ Watson said. ‘You don’t know what they go through in their lives or what they come here for. This is where they feel like they have to be.’ Decades ago, white gays settled in the West Village because it was safe, said Rickke Mananzala, co-director of FIERCE, a gay youth advocacy organization. He said young people tell him that they come for the same reason, and that they have a right to hang out in the West Village even if they can’t afford to live here.”

Certainly a complex issue, which begs a third perspective from one resident, 80-year-old Bob Kohler: “The young gays’ behavior can be irritating, said Kohler, who participated in the Stonewall protests, watched his neighbors die from AIDS and refused to move when the neighborhood became straighter and wealthier. ‘Do we crucify people because they’re a nuisance? Do we go up to them and say, ‘You don’t belong here for being young and loud, and being people of color? ‘It’s life,” he said. “It changes, and we have to change with it.'”

A new generation in the West Village [la times]