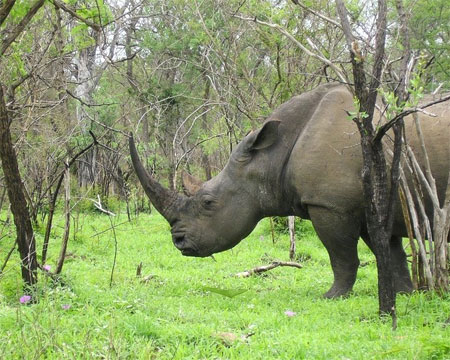 A rare northern white rhinocerous named “Nadi” who was living at the San Diego Zoo, has died, leaving the dwindling numbers of the species at 13 in the world. Only five are known to exist in the wild, at the Garamba National Park in the Democratic Republic of Congo. Six are in captivity in the Czech Republic, and two others remain at the San Diego Zoo.

Nadi was thought to be over 40 years old, according to NBC San Diego: “Nadi was brought in from the wild in Africa in 1972 and was part of a group maintained in the Czech Republic. Nadi and another female rhino came to the Wild Animal Park in 1989 as part of a last-ditch effort to breed the critically endangered species. Although both females were of advanced years, zoo staff hoped that the presence of a new male rhino would inspire breeding. Reproductive efforts were undertaken throughout the early 1990s but no calves were produced.”