As Fort Lauderdale Mayor Jim Naugle, and “religious leaders” from the newly-formed group healthypublicplaces.com held a news conference on the steps of City Hall to continue their hate-based fear-mongering regarding gay sex in public toilets, Michael Rajnor, a member of the Campaign to End AIDS, exploded in a vocal tirade aimed squarely at the mayor. 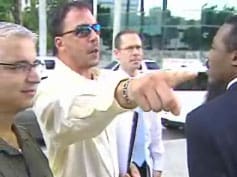 In July, Naugle proposed installing a timed, $250,000 robotic toilet in Fort Lauderdale public restrooms. Naugle, who claims he uses the word “homosexuals” to describe gay men rather than “gay” because gay people “are unhappy,” has said that an added plus to having the toilets is that they would keep gay people from using the facilities. 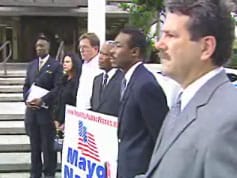 Today, Naugle stood with Rev. O’Neal Dozier, who said: “We want the homosexual community to know that we love them and that God loves them also. But God hates the act of homosexuality.”

Said Rajnor: “To have African-American members stand there while this mayor has disregarded the Sistrunk community in funding and not made certain initiatives go forth to help the African-American community, they’re hypocrites to use the Bible.”