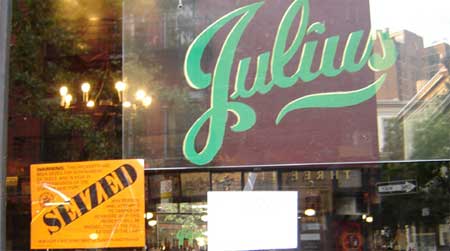 In a 2002 issue of New York magazine, Edmund White wrote of the West Village gay bar Julius: “Of course, for me, the Ur–classic gay bar was Julius in the Village, which I first visited in the mid-sixties. Mayor Wagner was closing gay bars as fast as they could open to clean up New York for the World’s Fair. If he left Julius open, it was only because it was well-lit and had a few conspicuous women. There was even a period when we weren’t allowed to face the bar but had to stand absurdly with our back to it to prove, I suppose, that we had nothing to hide.”

It has been around since the Stonewall era, but this week the New York State Department of Taxation and Finance seized the longstanding bar, about which Gawker disagreed with White, calling it “the worst and most amazing craphole bar in New York City, a place of such filth that one was reluctant to touch even a bottle of beer.”