Bill Whatcott, a candidate for mayor in Edmonton, Alberta is happy to run on a platform of hate. 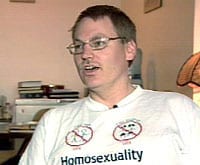 According to the Winnipeg Sun, the “fringe candidate’s” views are being tolerated by local out gay public figures. Councillor Michael Phair and Edmonton Police Commissioner Murray Billet both say let him run…at the mouth:

“Billet agreed to weigh-in on Whatcott ‘because it’s important to expose what a cowboy this guy really is.’ He called Whatcott a poor representative of Edmonton in 2007 and said his ‘platform of intolerance’ harm the city’s image. ‘His message is vitriolic and un-Canadian. This is the kind of person who gives Albertan’s a red-neck reputation and it’s undeserved.’ Phair called Whatcott’s comments ‘distasteful’ and his campaign ‘amateur,’ as it fails to address any local issues such as infrastructure or transit. ‘And as a gay politician I can tell you voters don’t care about your sexual orientation. They care about paved roads, improved traffic flow and snow removal. And they don’t want someone who is intolerant.'”

Whatcott has an interesting background. The paper reports that the candidate “admits performing ‘homosexual acts’ for money as a teen but has since ‘found God and repented for the repugnant things’ in his past.”