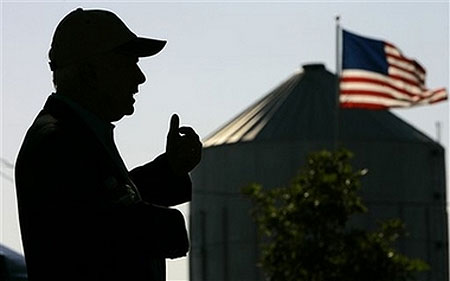 In New Hampshire today, John McCain was slammed by a Concord high school student after responding to a question about gay rights, ABC reports.

After McCain reportedly answered student William Sleaster’s question by reiterating his support for “Don’t Ask, Don’t Tell” and “his belief in the sanctity of marriage” the student spoke up again:

SLEASTER: “Do you support civil unions or gay marriage?”

MCCAIN: “I do not. I think that they impinge on the status and the sanctity of marriage between a man and a woman.”

MCCAIN: “I wouldn’t put that interpretation on my position, but I understand yours.”

ABC adds, “Sleaster went on to ask another question about how to help the working class in America, which McCain fielded by talking about the country’s need to figure out education and health care, and to secure the environment. Sleaster indicated that he wanted to follow up again.”

MCCAIN: “You have one more? Go ahead you’re doing good.”

SLEASTER: “I came here looking to see a leader. I don’t.”

MCCAIN: “I understand. I thank you. That’s what America is all about.”