I had only seen one portion of the McCain Concord High School student exchange from yesterday, and I thought that was bad. And no, I’m not even referring to the part where he called one student a “little jerk”. Somehow, I missed this priceless moment. 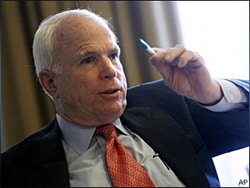 “Another student asked McCain what he would do on ‘LGBT’ issues and on ‘workers’ rights?’ McCain, paused, confused by the question. Someone in the crowd shouted out ‘lesbian, gay, bisexual and transgender.’ ‘I had not heard that phrase before,’ McCain said of LGBT.”

Then again, I’m not surprised at the answer, coming from a man worried about the effect of “gay sweaters” who is not sure if condoms help stop the spread of HIV.