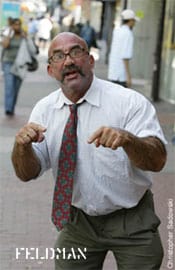 According to the Post the judge, who is hearing the case about a 20-year-old man who was shot by police, said: “I know making reference to your, what appeared to be dancing as part of your cross-examination and your flamboyant nature as I addressed it, I hope it won’t happen again. Just try to control yourself.”

Feldman later complained: “With all due respect, I mind your characterization of my nature of dancing around and being flamboyant as homophobic.”

The judge said he was free to file a formal complaint, which Feldman, who claims he was “gesticulating with [his] hands,” says he won’t do.

Said Feldman: “I give him the benefit of the doubt. I happen to think he’s actually a top-notch, top-drawer, intelligent judge . . . I don’t think he really meant to offend. But I do think it’s subconscious homophobia.”

Previous Post: « Oprah to Feature Gay People Around the World Today
Next Post: Another look at the Larry Craig – Matt Lauer Interview »