In an online question and answer session over the weekend, Jim Neal, the Democratic challenger for Elizabeth Dole’s Senate seat, acknowledged that he is gay. 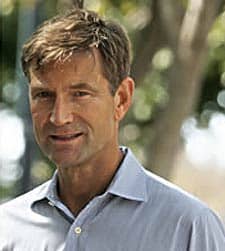 In response to a one participant’s statement, “I’ve heard you are gay,” Neal answered, “I am indeed. No secret and no big deal to me– I wouldn’t be running if I didn’t think otherwise.”

When asked the follow-up question, “Do you really think a gay man can be elected in North Carolina?” Neal replied:

“I’m not running this race to lose. I’m not running to make some social statement. I’m running to lead in the Senate for the voters in NC– something Senator Dole has not done. When people meet me, they’ll see beyond the labels and into my character.”

That line of questioning led into an inquiry about his position on gay marriage. Said Neal: “It’s okay if churches want to unite same-sex couples; it’s okay if they don’t. That’s their Constitutional right which I support 100%. But when it comes to the Government, I’m not in favor of any laws that discriminate against anyone for any reason.”

In response to one participant’s warning that the right wing would be after him, Neal replied, “I’m a big boy. I can take it and I can dish it.”