A judge hearing the case of Florida Rep. Bob Allen, who was arrested after offering an undercover police officer $20 for the opportunity to perform oral sex in a public men’s room in July, has thrown out a remark Allen made during arrest, saying it “was not relevant to the misdemeanor charge of solicitation for prostitution.” 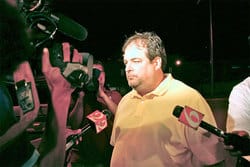 Florida Today reports: “Titusville police officers say Allen asked if his position as a lawmaker ‘would help’ after they arrested him July 11. Allen is accused of agreeing to pay an undercover officer $20 to perform a sex act. Allen’s attorneys say the Merritt Island Republican was misquoted.”

Because “prosecutors are not charging Allen with any offense of bribery or misuse of authority,” the statement is not relevant to the case, the judge wrote.

Allen’s lawyer has asked the judge to throw out the remark at a hearing at the beginning of the month. Allen’s trial begins Monday.